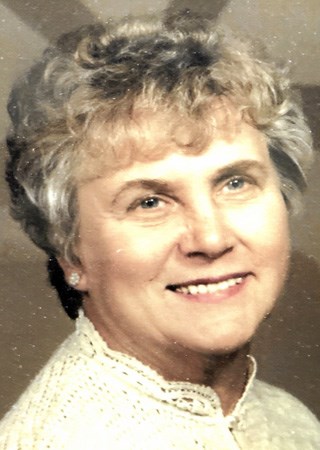 Mary A. Webb died Tuesday, October 19, 2021 at Bethany St. Joseph Health Care Center with family at her side.

Mary was born on January 26, 1928 to Margaret and Albert Mahling in Randall, MN. She was the fifth child of seven.

Mary graduated from St. Francis High School in Little Falls, MN.She soon moved to Nevada, Iowa, where she met and married Don. They remained in the Ames, Iowa area until Don completed his degree at Iowa State University. In 1955, they moved their family to South Milwaukee, WI. Mary was very involved in the activities of her children at St. Mary's School and Church. She was pivotal in organizing the first hot lunch programs, as well as being a Girl Scout leader and a CCD teacher. She also worked some various retail jobs during this time. Mary and Don moved their family to La Crosse in 1965. Mary always liked working with numbers and took a job as a bookkeeper at the Montgomery Ward store. Some years later, she was proud to be part of the original crew to open the new Blain's Farm and Fleet store. She worked there until her retirement.

Upon retirement, Mary and Don spent many winters in sunny Arizona.

Mary led an active social life and loved playing Bridge and Bunco with great friends. She was an avid reader and enjoyed lively conversations in Book Club with her friends. Mary and Don cherished their years of service with Lions and Lioness Club. They traveled to many conventions.

Mary was an avid sports fan. She and Don spent many summer evenings at Logger Field watching baseball. Mary could be found watching the Brewers and Packers up to the very end. Mary loved spending time with her family. She especially enjoyed her grandchildren and great-grandchildren.

Mary was preceded in death by her parents, her husband of 70 years, Don, one son, David, two sisters and three brothers.

A funeral Mass will be held at 11:00 a.m. on Saturday, November 6 in Blessed Sacrament Catholic Church located at 130 Losey Blvd. S. in La Crosse. Friends and family may visit from 10:00 a.m. until time of Mass at the church. A private burial will take place at a later date.

In lieu of flowers, donations may be made to Bethany St. Joseph Health Care Center or charity of your choice.

A very special thanks to all of the staff at Bethany St. Joseph for their kind and compassionate care of Mary these past years.

Blaschke and Schneider Funeral Home is assisting the family with arrangements.