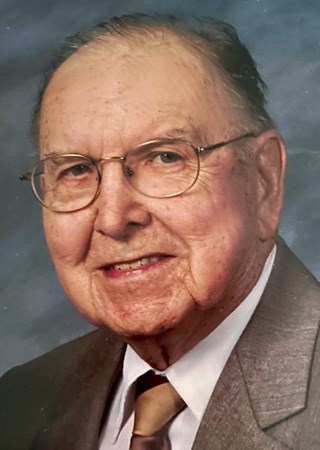 MADISON, WI - Owen D. Bekkum of Madison, Wisconsin passed away July 16, 2021, at Attic Angels Health Care Center. A memorial service will be held on Wednesday, July 21, 2021, at 2 P.M. at Vosseteig Funeral Home, 708 South Main Street, Westby, Wisconsin, with visitation at 1 P.M. Burial will be in Viroqua Cemetery in Viroqua, Wisconsin.

Owen was born in Westby, Wisconsin on March 2, 1924, to Alfred and Huldah (Storbakken) Bekkum. Despite the family's financial struggles during the Depression, he was blessed with a close-knit family and benefitted from a large extended family as well, most of whom lived on farms nearby or in Westby itself. He and his older sister Helen spent many happy summer days on the Storbakken farm in Coon Valley with their grandparents, fishing in the nearby creek or helping make lefse and strull with their grandma.

Owen graduated from Westby High School in 1942, and started college, but was drafted into the Army during World War II. He served from 1943 - 1946, and was a member of the "Ole Battalion," which consisted of Norwegian-Americans who could ski and speak Norwegian.

He finished college on the G.I. Bill in 1950, with a B.A. in Business Administration from the University of Wisconsin. After taking graduate courses at Northwestern University, he passed his C.P.A. exam and started his career at Arthur Anderson Accounting Firm in Chicago. This was followed by a move to New York to work at Hertz Corporation for a few years, and then another move back to Chicago where he reached the pinnacle of his career from 1963 – 1988, as President and finally CEO of Northern Illinois Gas Company in Aurora, Illinois.

He met his first wife Dorothy (Jobs), who was already a successful business woman, while he was a college student working a part-time job. They were happily married for fifty years until her death in 2000. Although they never had children of their own, their own families were extremely important to them. Over many years, they faithfully attended birthdays, graduations, weddings, and other special events for their many nieces and nephews, and even helped out with college expenses.

Owen married his second wife, Naomi (Flugstad), a music teacher in Madison, in 2001. They had both grown up in Westby, and had graduated a year apart from the same high school, but had not seen each other over all those years in between. They both spoke Norwegian and had many interests in common pertaining to their Norwegian heritage. They were married for sixteen years until her death in 2018.

Being financially successful allowed Owen to indulge in his favorite hobby: collecting antique cars. He owned a 1931 Packard, a 1935 Auburn, as well as Bentley and Rolls Royce sedans and convertibles. He even had a bright red fire engine for a while, which he enjoyed driving in the Westby Syttende Mai parade for several years.

He traveled extensively to Europe, Canada, and South America. His interest in genealogy took him to Norway several times, where he visited distant relatives and learned a lot about his family history there.

Although he had many beautiful homes, cars, and luxuries that he enjoyed, he was extremely generous throughout his life, giving thousands to scholarship funds, churches, charities, and family. His money helped build the Bekkum Memorial Library and Norskedalen in the Westby area. He also gave generously to the Vesterheim Norwegian Museum in Decorah, Iowa, and was highly influential in the Norwegian-American Genealogical Center of Madison.

When asked once what he thought was the main reason for his success in his career, he answered that he had always tried to deal honestly and ethically with colleagues in the business world. Owen was a very religious man who tried to incorporate the teachings of the Bible into his daily life. He and Naomi were active during their married life in Bethel Lutheran Church of Madison.

Owen lived a full life over his ninety-seven years and served as an inspiration to many. He will be greatly missed by friends and relatives, including one sister, Annette Shaw of Westby, and numerous cousins, nieces, nephews, and their spouses.

He was preceded in death by his first wife Dorothy, and his second wife Naomi; his parents, Alfred and Huldah Bekkum; one sister and husband, Helen and Raymond Russell; one brother and wife, Rolf and Betty Bekkum; one brother-in-law, Lester Shaw; and one nephew, Jim Shaw; as well as grandparents, aunts, uncles, and cousins.

Memorial gifts may be given to Westby United Methodist Church, Westby, Wisconsin, and Agrace Hospice, 5395 East Cheryl Parkway, Fitchburg, Wisconsin, 53711. Online condolences may be made at www.vossfh.com.