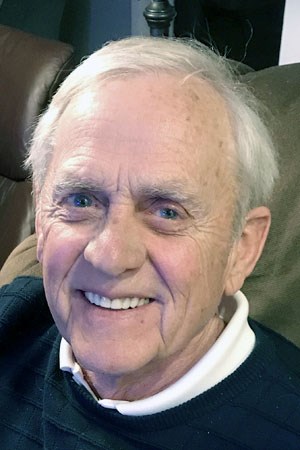 Paul Michael Poehling, 75, passed away peacefully at his home surrounded by love on September 24, 2021, having lived a full and wonderful life. Paul was born in La Crosse on August 21,1946 to Bill and Mary Poehling. He did not fear death and met the health challenges of ALS with dignity and grace, staying strong and smiling to the end; he was our pillar of strength.

Paul graduated from Aquinas High School and received his BS degree at Mankato State University. In the summer of 1967, he went on a blind date with a Minnesota farm girl, Pat Graff (he always said it was the luckiest day of her life) and married her the following summer. Paul started his working career as a CPA with Alexander Grant in Minneapolis and after four years was promoted to partner, the youngest at that time to ever earn that honor. He accepted a transfer to his hometown of La Crosse and eventually became an agent at Equitable Life for 30 years.

Paul was a man of deep faith and served his church on many committees at Blessed Sacrament Catholic Church. He was also involved in the community as a member of the boards of St. Francis Hospital Foundation, Coulee Council on Addictions, the La Crosse Country Club, Blessed Sacrament Endowment Trust and the Aquinas Catholic Schools Foundation, where he led the fund raising for the renovation of and addition to Aquinas High School in 1996.

Paul was a quietly generous and caring soul, never seeking acknowledgement of his many gifts to those in need.

Paul enjoyed playing golf and never met a tip from a buddy, an instructional video, a lesson from a pro or a magazine article about how to improve his game that he didn't try. He was great at helping his family figure out their games, but alas, he never quite "got it figured out" to be the golfer he aspired to be. No can (never a bottle!) of Diet Pepsi was safe in his presence and breakfast wasn't complete without two of Pat's homemade chocolate chip cookies. He also was known for famously saying "A car is a loaded weapon" while teaching Andrea and Dan to drive.

Above all, Paul was a family man who cherished the many adventures, misadventures and ordinary days spent with Pat. He was a loving and wise father to Andrea and Dan and never failed to be present at all of their activities. Later in life he enthusiastically welcomed Michael and Amy into the family with open and loving arms. His most treasured role was "Handy Grandpa" to Isabel and Alex, whom he loved unconditionally.

Our heartfelt gratitude and love to his family, friends and neighbors, especially Tom and Barb Roberts, Tom and Jackie Rand and Father Peter Raj who were so faithful to him on his last journey.

Thank you to the Hospice team at Mayo: Lindsey, Liz and Trin, and to Dr. Scott Cunningham for the comfort and care they provided to Paul in his final days.

Paul will be lovingly remembered by his wife Pat and his children: Andrea (Michael) and Dan (Amy); and grandchildren: Isabel and Alex. He is survived by his siblings: Betty (Bill) McKillip, Leo (Julie), Hank (Karen) and Bill. He is also survived by Sandy Poehling, Mary Poehling; and his sisters-in-law: Margaret (Jim) Barnes and Rita (Jon) Gebert; brother-in-law Tom (Cher); and many nieces and nephews. He was preceded in death by his parents, brother Tom (TP), brother-in-law Dick Graff, niece Holley and nephew Ryan.

Do not fear death, but rather the unlived life. You don't have to live forever, you just have to live. Tuck Everlasting

Our hearts are empty, but we are blessed to have known you.

"Everything will be just fine".

A Memorial Mass will be held on Tuesday, September 28 at 11:00 a.m. at Blessed Sacrament Catholic Church, 130 Losey Blvd. South, with visitation beginning at 9:00 a.m. Rev. Peter Raj will officiate. A private interment will be held at the Gate of Heaven Catholic Cemetery at a later date. Paul's family thanks Blaschke & Schneider Funeral Homes for their assistance.

Online condolences may be made at www.blaschkeschneider.com

Published by La Crosse Tribune on Sep. 26, 2021.
To plant trees in memory, please visit the Sympathy Store.
MEMORIAL EVENTS
Sep
28
Visitation
9:00a.m. - 11:00a.m.
Blessed Sacrament Catholic Church
130 Losey Blvd. South, WI
Sep
28
Memorial Mass
11:00a.m.
Blessed Sacrament Catholic Church
130 Losey Blvd. South, WI
Funeral services provided by:
Blaschke-Schneider Funeral Homes
MAKE A DONATION
MEMORIES & CONDOLENCES
Sponsored by Blaschke-Schneider Funeral Homes.
2 Entries
With Deepest Sympathy we send this message from California. We will be in the air during Paul's Funeral Mass but will watch out the window, above the clouds, for all of the angels coming to great him!!! How lucky you all were to have him so close to you in life. Now he has simply gone ahead to "make a place for you" Sending prayers your way, John and Pat Stellflue
Pat & john Stellflue
School
September 27, 2021
Pat Andrea and Dan I was so sorry to read of Paul's passing. My heart goes out to all of you as you continue on this bumpy road called life. My prayers will include you all and Paul.
Linda De Long
Friend
September 26, 2021
Showing 1 - 2 of 2 results