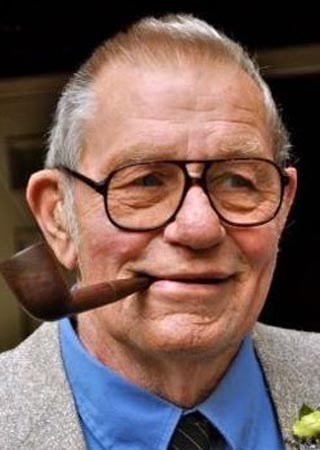 FOUNTAIN CITY, WI - Wayne Tabbert passed away on April 20, 2021 at St. Michael's Assisted Living in Fountain City, Wisconsin. He was born on June 12th, 1928 to Alfred and Esther (Johnson) Tabbert. He was raised on Castle Mound Farm in Holmen where he helped his dad milk the dairy herd, raise pigs and chickens, and plant and harvest crops. In school Wayne enjoyed being in the band, choir, and participating in school plays. Being the only son of a farmer, he was not allowed to participate in sports, baseball being the one exception. So, as his children grew, he encouraged them to participate in any school or community event they got interested in and he made sure to make every ball game, concert, or other activity they were a part of.

Wayne (aka 'Tex', 'Keebler') met his future bride, Patricia Pretasky, at a dance and they were married on June 24th, 1950. They raised seven children (a basketball team and two cheerleaders) on the family farm. Wayne also had a full time job with the La Crosse Telephone Company. Although the 'two' jobs kept him busy, he still took the time to supervise his sons' Boy Scout troops, go swimming in the Black River, play ball and do various other activities with his kids. Wayne was also an avid bowler and was proud of his 'high game' and 'high series' trophies. They moved with him from place to place throughout his life. In the mid- 1960s, he was introduced to the game of golf by his friend Floyd Burton and at some point fancied turning his farm into a nine hole golf course. This was the beginning of "Castle Mound Golf Course."

His love for the outdoors eventually inspired Wayne to move to northern Wisconsin where he found a beautiful spot on Basswood Lake. We would often see him looking through his binoculars at eagles, otter, deer or whatever wildlife the lake had to offer. After retirement he worked part time for the Forestry Service. He loved hunting, fishing, playing cards, his pipe, a brandy, and walking in the woods. He also loved to spend time at his work bench creating treasures for his children and grandchildren. Most of all he loved spending time with his family, especially grandchildren, "Not a bad looking one in the bunch!"

Wayne was preceded in death by his parents; his brothers: Gregory, Keith, and Roger; his sister, Ann; his second wife,, Lorraine; brothers-in-law: Bob, Dick, and Ron Pretasky, and Howard Amundson; his beloved son John, and precious granddaughters: Anna and Amy.

In keeping with Wayne's wishes, there will be a celebration of life event for him at the Holmen American Legion (419 1st Ave W, Holmen) on Saturday, May 1, 2021 from 1- 5PM. Memorials may be sent in his name to the National Forest Foundation. Online condolences can be shared with the family by visiting www.dickinsonfuneralhomes.com. Dickinson Family Funeral Home and Crematory of Holmen is assisting the family.

Wayne's family would like to extend their gratitude to St Michael's Assisted Living and Winona Health Hospice for the wonderful care he received.

To plant trees in memory, please visit our Sympathy Store.
Published by La Crosse Tribune on Apr. 25, 2021.
MEMORIAL EVENTS
May
1
Celebration of Life
1:00p.m. - 5:00p.m.
Holmen American Legion
(419 1st Ave W, Holmen, Wisconsin
Funeral services provided by:
Dickinson Family Funeral Homes
GUEST BOOK
Sponsored by Dickinson Family Funeral Homes.
2 Entries
I can always hear his laugh...hard to lose someone like Wayne, but oh, the memories and the stories...keep them going...love to all, Nancy Jo
Nancy Jo Sutton
April 27, 2021
I wanted to offer my condolences to the family. Sorry for the loss of your Dad. You´re a great bunch of people! Your folks did a wonderful job! Your Mom really taught me a lot and honed in my cooking skills when we worked together at the Palace Pantry when I was a teenager, way back in the day! She was very sweet to me. I also really enjoyed reading the obituary. Take care and God Bless.
John Heighway
April 26, 2021