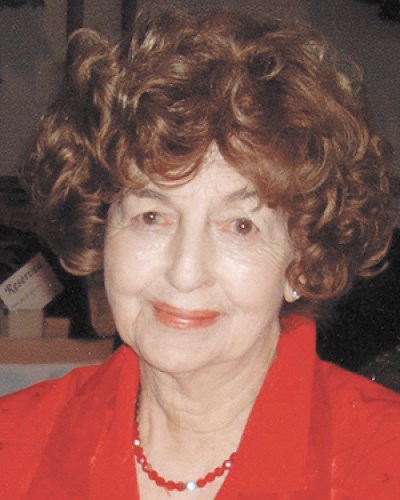 On the morning of Feb. 19, 2017, Martha passed away peacefully of natural causes at the age of 96. Martha was surrounded by loving family in Oak Park, CA.

Martha was born, Martha Jean Jagger, on Jan. 13, 1921, in Barnesboro, Pennsylvania. She had a twin sister, Margaret Ann, and was the last survivor of her eight brothers and sisters. She was married for nearly 60 years to Robert "Bob" Selleck from 1941, until his death, in March of 2001. After being raised in Detroit, Martha and Bob moved to Sherman Oaks, CA, where they raised their four children.

Martha was an extremely loving and caring woman who will be remembered for her grace and charm. She was first and foremost a devoted wife, mother, and grandmother—one to lead by example. She was her children's role model on how to successfully blend dedication to family, while also serving others. She lived a full and eventful life, a blessing to family and friends.

Martha established a tradition of "family first," as a proud mother of Robert "Bob" Selleck II, Thomas "Tom" Selleck, Martha "Marti" Ketchum and Daniel "Dan" Selleck. From everyday rituals, like her famous brown bag lunches, to Sunday family dinners, she made sure that her family knew that they were important and special to her. Holidays were even more special, celebrated with delicious home-cooked meals, including her traditional turkey dinner and all the fixings, of course. "Love, understanding, and discipline," Martha said when asked her formula for parenting. Although all of the children were closely supervised, they were also encouraged to make independent decisions--even wrong ones, but not if they were too dangerous.

As their "Mimi," Martha loved her 14 grandchildren and 18 great-grandchildren. They have fond memories of their overnight stays, playing baseball, feeding gold fish, swimming, playing card games, and helping her prepare her famous meals in the kitchen. Not only do they cherish the memories of the activities, but they also are grateful for her life lessons, learning how to treat others with kindness and compassion.

Aside from devoting herself to her family, Martha found time to give back to the community. She served as president of the Motion Picture Mothers association for 19 years. In recognition of her support, she and her husband were honored to receive the Golden Hands Award from the Boys and Girls Club of the San Fernando Valley and the Premier Parents Award from the March of Dimes Birth Defect Foundation. Perhaps most fitting from her children's perspective, she was honored by the American Mothers Organization for her community support while preserving her role as a mother by naming her California Mother of the Year.

Martha and her husband were longtime members of the Congregational Church of the Chimes located in Sherman Oaks. Both were also active supporters of Valley Presbyterian Hospital in Van Nuys, and participated in the launch of its state-of-the-art Blood Diagnosis Lab, which bears their name, in honor of their contributions and support.

While Martha will be missed, her legacy lives on with those who feel privileged to have been part of her life.

Published by Los Angeles Daily News on Mar. 19, 2017.
To plant trees in memory, please visit the Sympathy Store.
MEMORIAL EVENTS
To offer your sympathy during this difficult time, you can now have memorial trees planted in a National Forest in memory of your loved one.
Funeral services provided by:
Valley Oaks-Griffin Memorial Park, Mortuary & Crematory
MAKE A DONATION
MEMORIES & CONDOLENCES
Sponsored by Los Angeles Daily News.
17 Entries
Barnesboro, Pa is now Northern Cambria and it such a small town that it’s crazy to think Tom’s mom could have been from town. RIP Martha
Larry Fisherman
Acquaintance
April 1, 2021
I wish I could have met her, she was relative to my late Grandmother Ruth Lukity (Bassett). We have a very small family as it is and I would love to have met my cousins from her side being my father was an only child. May her memory shine on through the works she has left behind in the theater, which my son was a major and graduated 2018. Obviously my grandmothers side. Blessings to all who knew her.
Karen Bashaw
March 10, 2020
On the occasion of the first anniversary of her death, the very special Mrs. Selleck is remembered each day in my humble prayers. Her wonderful son, Thomas, has always been an inspiration in my life with his kindness, gentleness, great sense of humor & charming smile. Mrs. Martha & her family will always have a special place in my prayers. God bless!
Fr. Alfred Fish
March 10, 2019
My prayers for comfort for the Selleck family in this time of great loss. The loss of a mother is always hard. Cherish the memories you have of her and she will live forever in you hearts and lives.
God bless you all.
Sandra Bowes
August 16, 2017
My prayers are with the Selleck family in the list of their loved one she in Heaven watching over her loving family remember when you hear bells ring she getting her set of wings from God bless each one of y'all your friend boo Taylor from Nashville Tn
Melinda Taylor
July 16, 2017
Although I never had the honor & privilege of meeting Mrs. Selleck, please know that Lady Martha will always be remembered in my daily prayers. Father Alfred H. Fish (a humble fan of Thomas-"Magnum"& the wonderful Selleck Family).
Fr. Alfred Fish
May 29, 2017
Martha and her twin sister Maggie, were very precious to me. Words cannot express how much I loved and cared about both of them. I will miss them until I see them in heaven.
Coty
May 16, 2017
So Sorry for the loss of your Mother Prayers for comfort and peace knowing she's in a better place.
Donna Satterwhite
April 22, 2017
Not a relative, but a fan of hers on Tom. I live in Dearborn HTS. Mi. And know the background of the times we were raised. She sounds like person my mom was. So render n caring. God bless your family. May she rest in peace in God's love.
Lorraine Lester
Acquaintance
April 1, 2017
Dear Family, I just heard the sad news of Auntie Martha's passing. I'm so gr8ful she passed peacefully & surrounded by you, her loving family. I have so many fond memories of growing up w/Martha in my life. She was a beautiful woman, a beautiful spirit inside & out. I heard this verse: "We give them back to you dear God, who first gave them to us, & as You did not lose them in the giving, we do not lose them in the return" Auntie Martha will always live on in our memories. My deepest condolences to your all. Love & Prayers, Barbara (Licht)
March 24, 2017
Our sympathies. Losing a parent is so very had. May your memories give you comfort. Achauer family
Achauer
March 23, 2017
With deepest sympathy, may the power of prayer ease your sorrow, give you peace and provide much comfort for you during this difficult time. Matthew 21:22
March 21, 2017
Bob,
My condolences to you and your family.
Randy Wendt, Camarillo
March 20, 2017
Shirley
March 20, 2017
My condolences to the family of Martha Selleck. I have been told she was a genuine lady!
I grew up being told we were a cousin of Tom Selleck on my Paternal Mother's side. She was Ruth Bassett, sister's, Edna and Elva Bassett, born in Barnesboro PA also.
I would like to contribute to the Motion Picture & TV Fund in honor of time and her presence.
I, too have a son, who started in youth theater for 10 years, came back home to direct youth theater for two years, and spent many hours prepping with him. He is now 3rd year Music/Theater at Oakland University in Rochester MI. I can only hope and pray, I may give to such an organization the years and time of Mrs. Selleck.
May run in the family after all.
Karen Bashaw
March 20, 2017
Condolences to your family. What a kind person she was. I had the pleasure of having lunch a few times with this beautiful, classy woman at Louie & Helene's home, in the 1980's. I'll never forget when the topic of our conversation came to birthdays, she shared that she was not too happy that her son had mentioned on television that he had just celebrated his 50th birthday (mine is on the same day). She said "now everyone will know how old I am!) we laughed :) You would have never guessed, she was stunning.
Kind Regards,
Beverly C.
March 19, 2017
Mac Brown
March 17, 2017
Showing 1 - 17 of 17 results