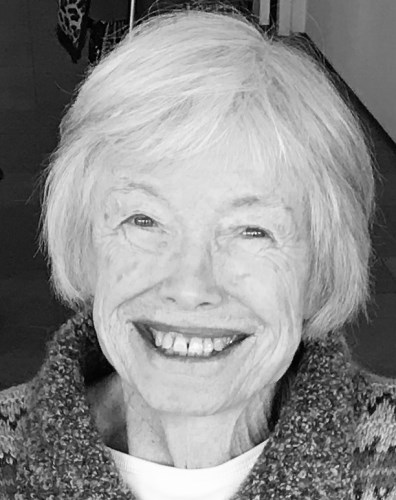 BORN
1940
DIED
2020
Marion Mimi' Ewens February 2, 1940 - July 2, 2020 La Jolla Marion "Mimi" Smith Hambrick Ewens was born on Groundhog Day, February 2, 1940, at Mercy Hospital in San Diego. She was the daughter of Vice-Admiral John Victor and Marion Smith, and the granddaughter of Holland "Howlin Mad" Smith, a General in the United States Marine Corps during World War II. Mimi was raised in a Navy family and moved frequently. Her early schooling was in Coronado. When the family moved to Virginia, she attended the St. Agnes School. She spent her first two years at Smith College before transferring to the University of North Carolina at Chapel Hill, graduating with a degree in Comparative Literature. While at UNC, she was president of the Women's Athletic Association, on the Student Council, and Managing Editor of the yearbook. In 1960, President Kennedy proposed the idea of the Peace Corps, and Mimi applied immediately. After completing her training, she was assigned to Katmandu, Nepal, where she taught English as a second language. While in the Peace Corps, she was married by a traveling missionary to Ralph Hambrick. After leaving the Peace Corps, they moved to Hanover, New Hampshire, so that Ralph could continue his studies at Dartmouth. Then on to Syracuse, and finally to College Station, where Ralph taught at Texas A&M. In 1972 Mimi and sons Summers and Jay moved to La Jolla. Mimi was a member of St. James by the Sea Episcopal Church, the La Jolla Garden Club, a volunteer at the election polls, on the Save the Seals Committee, and a volunteer at the La Jolla Library for many years. She was a docent at the San Diego Museum of Art and a teacher for their two-year docent class. Mimi is survived by her sons Summers Hambrick of Midlothian, Virginia, and Jay Hambrick, his wife Kammy, two grandsons, Jack and Alex of Richmond, Virginia, and her brother Holland M. Smith of La Jolla. She was preceded in death by her husband, George Ewens. No services are planned at this time. Memorial gifts may be made in Mimi's memory to The Elizabeth Hospice, Escondido, California. Please sign the guest book online at legacy.com/obituaries/ lajollalight
Published by La Jolla Light from Jul. 16 to Jul. 23, 2020.
To plant trees in memory, please visit the Sympathy Store.
MEMORIAL EVENTS
To offer your sympathy during this difficult time, you can now have memorial trees planted in a National Forest in memory of your loved one.
MAKE A DONATION
MEMORIES & CONDOLENCES
9 Entries
Mimi was one of our trainers for Peace Corps Nepal IV Volunteers in 1964 in Oregon, even heavily pregnant with (I assume) Summers. She was invincible and the information she shared with us to prepare us was all too accurate! I was silently grateful to her many, many times.
Brenda Terry-Hahn
Friend
August 15, 2020
Friends of Nepal, the association of Returned Peace Corps Volunteers who have served in Nepal, wishes to extend condolences to Mimi's family and friends. Her volunteer service to the Peace Corps and the country of Nepal is greatly appreciated.
Duane Karlen
July 30, 2020
I have wonderful memories of Mimi as a member of St. James Episcopal Church in La Jolla. She was a great member of our usher corps among many other activities. She will be greatly missed. My condolences to her family, especially fellow parishioner Holland Smith. May she rest in peace.
William Purves
Friend
July 26, 2020
remember Mimi very well. She was a welcome addition to the San Diego Museum of Art Docent Council. She was extremely smart and always had something worthwhile to add to our conversations and studies. I am really shocked and sad to learn of her death.
Phyllis Speer
Friend
July 21, 2020
I met Mimi through the La Jolla Soccer League and the Nomads Soccer club. We both had children who played, and we both volunteered long hours for the success of the program. Mimi was a hard worker, dedicated, imaginative, generous with her time and spirit. She really loved her boys and secondarily, the other players around them. Any youth organization that had a volunteer like Mimi would be fortunate.
Judith Wesling
Friend
July 19, 2020
Mimi was a tireless,enthusiastic leader of my 2 year docent training class 20 years ago. I am most appreciative our our time together and mutual love of art and SDMA. thru the years we often saw each other around La Jolla, especially at our library where she often volunteered. My deepest sympathy on your familys loss. Please take care,
Anita LIndberg
Friend
July 19, 2020
I met Mimi years ago when I was staying and visiting next door
at Cammie's home. I loved being in Mimi's home with all of her cool
things from her travels! She was a cool woman and believed in so
many worthy causes! I know she will be missed by her family.
with sympathy,
Kate Moody Holbert
Kate Holbert
Friend
July 17, 2020
Blessings to family in this loss!
We will miss her. Cammie Girand, Dallas
Cammie Girand
Neighbor
July 16, 2020
sending my warmest and loving thoughts to the family. I remember Mimi driving summers and I to soccer practice and games on occasion.
Warmest regards
Chris oldstone
Chris oldstone
Friend
July 16, 2020
Showing 1 - 9 of 9 results