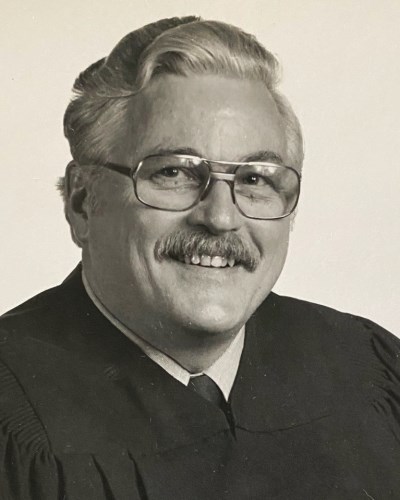 The Honorable Judge William F. Homer 89 passed away on August 4, 2020, in Tampa Florida. Judge Homer was born on September 19, 1930, in Wilkinsburg, Pennsylvania to Frederick Homer and Helen (Kirchhoff) Homer.

Judge Homer attended the Illinois Institute of Technology where he received his Bachelor's Degree in Electronic Engineering. Upon his graduation he served in the United States Navy during the Korean War. After he retired from the Navy, Homer attended John Marshall Law School where he earned his JD with honors. He joined and later became a partner with the Law Firm of Fuqua, Fuqua, Winter and Homer in Waukegan. He was appointed Associate Judge in 1974 and served on the bench until retirement in 1992. As a respectable Judge, he also had a great passion for music and the arts in Waukegan and throughout Lake County. He enjoyed playing with the Waukegan Symphony Orchestra and Waukegan City Band. He ultimately was the recipient of the Jack Benny Arts & Humanities Award! His pride and joy was being the co-founder of the award-winning "IL. British Style Brass Band" in which he played for almost 20 years!

He was preceded in death by his parents Fred and Helen Homer, his first wife Nanette Thomas and grandson Cameron Homer.

A celebration of life is planned later on this year in Waukegan, Illinois.

To plant trees in memory, please visit our Sympathy Store.
Published by News Sun from Aug. 14 to Aug. 15, 2020.
MEMORIAL EVENTS
No memorial events are currently scheduled.
To offer your sympathy during this difficult time, you can now have memorial trees planted in a National Forest in memory of your loved one.
MAKE A DONATION
MEMORIES & CONDOLENCES
5 Entries
I was Judge Homer's court clerk for a while and he was by far the nicest Judge on the bench. He was fair and honest and he loved the donuts his bailiff brought him! He is going to be missed by all who knew him.
Noreen Bouchard
Coworker
August 18, 2020
Ludwina and family,
So very sorry to hear of the passing of Bill. He and I had many good times at the "old court house" so many years ago. My thoughts are with you at this time.
Don Johnson
Friend
August 18, 2020
Judge Homer was on the bench when I first started prosecuting as a young lawyer in Lake County. He was always kind and respectful. I learned a lot about the practice of law from appearing in front of him. He was also fun-loving and there were many lunches at Ofelias in Waukegan where the courtroom staff could let down their hair and build comradery. It's been many years since those days but I thought his family would like to know how well-regarded he was. I can only assume that he was a wonderful husband and father. Please accept my heartfelt condolences.

Bella Maria Rappaport
Coworker
August 18, 2020
Judge William Homer was my grandfather. He was such a loving man who always encouraged my curiosity and never lost his patience with me. I always have warm feelings remembering back when him, Oma, my parents and I were all playing Domino's while camping at lake shelbyville. I miss you Opa, and I love you. Be at peace.
Paul Zeithammel
Grandchild
August 17, 2020
I was one of his Deputy's in the courthouse. That guy was great and made the best sausage and homemade beer. Many great stories I could tell and all of them wonderful. May God Bless his family he was truly an asset to the community and a good family man. Bill will be missed..
George Martin
Coworker
August 14, 2020
Showing 1 - 5 of 5 results