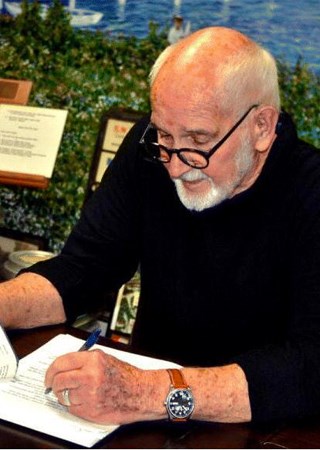 LAKE GENEVA - James Edward (Jim) Davis, 87, noted lake area historian, passed away unexpectedly at his Lake Geneva home on Saturday June 26, 2021. Davis will be remembered as a long-time member of the Geneva Lake Museum's Board of Directors and a docent who guided thousands of lake-area residents and visitors through the museum.

To know Jim was to love him.

Loyalty to family and friends was a high priority. His smile, warmth, sense of humor, and innumerable stories of his adventures will be treasured in memory.

Many local residents recall Jim's first wife, Renee, who passed away in 2008. He was devoted to her for more than 40 years and adopted her son Robert. Jim and Renee purchased a home in Lake Geneva in 1968, while he was still living and working in Palatine for International Harvester. He also lived in Chicago's Old Town for many years, where he became interested in local Chicago history. He later moved to Lake Geneva permanently upon his retirement in 1989.

Jim grew up in West Lafayette, Indiana. He was co-captain of his football team during high school. He earned a BS degree in Civil Engineering from Purdue University in 1959. He Served in the U.S. Army from 1953-1955 retiring at the rank of E4 Corporal. After graduating from Purdue, Jim went to work for International Harvester Construction Equipment Division, where he spent the next 29 years traveling the U.S., Canada as well as around the world. Jim loved to travel, which further sparked his interest in history.

Jim was an active volunteer in the Geneva Lake Community. He served four years on the Board of the Alzheimer's Association of Southeastern Wisconsin. He served as a moderator of the Pilgrim Church in Lake Geneva. He was a member of the Lake Geneva Preservation Commission. At the Geneva LakeMuseum, in addition to his board and docent duties, Jim was a speaker at several of the museum's "[email protected]" programs, co-chaired Museum Tours of Elgin Club, the Oak Hill Cemetery and Clear SkyLodge. In 2016 he co-authored (with museum President Ed Schwinn) a book on "Otto Young and Stone Manor", which is available in the museum's gift shop. He also presented several programs at the Lake Geneva Public Library.

Museum's Executive Director, Janet Ewing, said that just hours before his passing, Jim was at the museum working with her researching files and organizing research in the museum's library. Given Jim's dedication to the museum's library, a proposal will be made by the Board to formally recognize and dedicate the library to Jim's memory.

A memorial event to celebrate Jim's life will be held at the Geneva Lake Museum on Saturday July 24, 2021 that 5:30 PM.

Contributions in Jim's memory can be made to the Geneva Lake Museum or to the Alzheimer's Association of Southeastern Wisconsin. Links have been provided on the funeral homes website.

Derrick Funeral Home is honored to be assisting the family of Jim Davis.