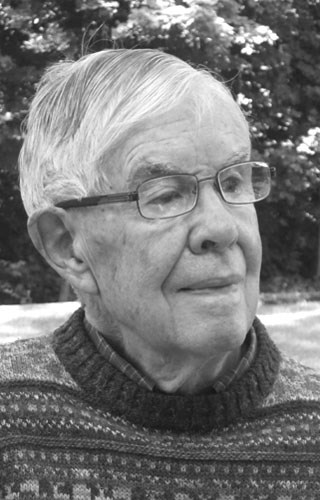 LINN TOWNSHIP - William (Bill) Bentsen, Olympic medalist, National Sailing Hall of Fame inductee, and an internationally respected expert on the racing rules of sailing, died on December 25 at his home in Linn Township. He was 90 years old.

In the 1940s at Lake Geneva Yacht Club, Bill raced a junior boat called a Cub in a fleet that included Buddy Melges, Jane Wiswell (later Pegel), Bill Freytag, and Bill Grunow, and during the following decades he competed in most of the scow classes  on the lake as skipper or crew. In 1963, Bill won the M20 Class National Championship, and in 1969, 1970, and 1971 he won the M20 Inland Lake Yachting Association Championship titles. His usual crew in the M20 was Ron Frankel; Jack Brellenthin was his crew in one of their Inland championship wins.

As crew for Buddy Melges, Bill Bentsen won a Bronze Medal at the 1964 Olympic Games in Japan (Flying Dutchman Class), a Gold Medal at the 1967 Pan American Games in Canada (Flying Dutchman), and, with third crew Bill Allen, a Gold Medal at the 1972 Olympic Games in Germany (Soling Class). In 1966, Bill finished first in division, elapsed time, in Yachting magazine's One-of-a-Kind Regatta, sailing a 38-foot Class A scow. He also raced iceboats, initially competing in the 12-foot DN Class and then in a 42-foot Class A stern-steerer that he owned with Walter Larkin. Don Frankel was his usual crew; later, Erich Schloemer crewed. Bill was a member of the Skeeter Ice Boat Club.

Bill Bentsen became keenly interested in the racing rules as a college student when he fouled out of a race at the Chicago Yacht Club and the protest committee chairman, Clare Udell, took the time to explain, word by word, the intricacies of the rule he had broken. The incident inspired Bill to study the racing rules with great care, and in the decades that followed he became a major contributor to their interpretation, revision, and simplification. When Janet Baxter was president of US Sailing, she dedicated The Racing Rules of Sailing 2005 – 2008 to Bill in recognition of his work. "Bill has generously given back his time and expertise to our sport," she wrote. "He recognizes how rules impact the way we sail and he has always pushed hard to get simple, clear words on each page."

At the national and international level, Bill Bentsen was a member from 1972 to 2008 (chair, 1979-1988) of the United States Sailing Association Racing Rules Committee, a member from 1984 to 2015 (chair, 1998-2002) of its Appeals Committee, and a member from 1979 to 2004 of the Racing Rules Committee of the International Sailing Federation now known as World Sailing, the international authority of the sport, based in England. He also served as a national judge for the Royal Yachting Association from 1995 to 1999 when he lived in England. Over the years, he served as a jury member at world and continental sailing championships, the 1979 Pan American Games, and the 1988 Olympic Regatta.

Bill Bentsen was the author of The Yacht Racing Rules Today (Dodd, Mead, 1974) and numerous articles for American, British, and Australian periodicals about boat speed and tactics, course design, scoring, and the racing rules. From 1963 to 1969, he was a contributing editor to One-Design and Offshore Yachtsman magazine.

In 1994, Bentsen received the Nathanael G. Herreshoff Trophy from US Sailing in recognition of his outstanding contributions to the sport. In 2008, he received that organization's Harmon Hawkins Trophy for his work in the field of race administration. In 1972, he was named to the Inter-Collegiate Yacht Racing Association College Sailing Hall of Fame; in 2008, to the Inland Lake Yachting Association Hall of Fame; and in 2017, to the National Sailing Hall of Fame. In 2007, US Sailing's Judges Committee named him Judge Emeritus in recognition of his distinguished service as a competitor and sailing official. In 2009 and 2016, Bill Bentsen was the recipient of Lake Geneva Yacht Club's Marie Kramp Award for Outstanding Service.

In 2009, Bill Bentsen was honored to receive World Sailing's Beppe Croce Trophy from the president of the organization, Goran Petersson of Sweden. The award recognizes outstanding voluntary contributions to the sport.

William Bruce Bentsen was born on February 18, 1930 in Chicago, Illinois, was educated in its public schools, and entered the University of Chicago College at 16 under a program that enrolled qualified students after two years of high school. He later transferred to Denison University, earning a bachelor's degree, then a master's  degree in economics at the University of Minnesota, and, after service in the United States Marine Corps, a doctorate in economics from the University of Wisconsin. He joined the faculty of Beloit College in Wisconsin as an assistant professor of economics and business, was associate dean of the College, and later worked for the Associated Colleges of the Midwest, the United States Yacht Racing Union (now US Sailing), and the Art Institute of Chicago.

Bill Bentsen was preceded in death by his parents, Holger and Elden Bentsen, and his sister, Beverly Spear. He is survived by his wife, Ellen, and two nieces.

Gifts in Bill Bentsen's memory may be made to the Geneva Lake Sailing School. No services are planned.

Toynton Funeral Home in Walworth is assisting the family.

To plant trees in memory, please visit our Sympathy Store.
Published by Lake Geneva Regional News on Dec. 31, 2020.
MEMORIAL EVENTS
No memorial events are currently scheduled.
To offer your sympathy during this difficult time, you can now have memorial trees planted in a National Forest in memory of your loved one.
Funeral services provided by:
Toynton Funeral Home
MAKE A DONATION
MEMORIES & CONDOLENCES
Sponsored by Toynton Funeral Home.
0 Entries
Be the first to post a memory or condolences.