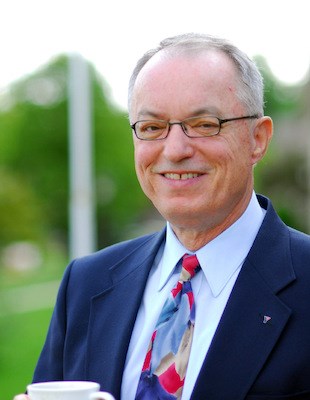 Lancaster - Bruce D. McAtee, age 75 of Lancaster, died Feb. 11, 2021, at home surrounded by family. He was born to the late Harry and Gertrude Davis McAtee in Piqua, Ohio. The son of a plumber, he acquired no technical skills, which allowed his son to win a 'best design' trophy for a pinewood derby car that appeared to have been made by a 6 year old, but was in fact mangled into shape by Bruce himself. What he lacked in craftsmanship, he compensated in personality. A font of puns, jokes, and malapropisms, Bruce made friends with all he encountered, including numerous chagrined waiters and waitresses, and was a renowned doodler and aspiring cartoonist. A lifelong fan of sports and games of all kinds, he played Center for the Earlham College football team, graduating in 1968, later closely following the Browns and OSU, where he was a Red Coat for over 10 years. Following graduation he embarked on his lifelong calling in public service. After spending two years in the Peace Corps, he began a 34 year career at the YMCA, with his last 17 years as the Director for the Robert K. Fox Family YMCA. Following his retirement in 2005 he served as a Lancaster City Councilman, sat on the boards of United Way and Big Brothers Big Sisters, was President of the Lancaster-Sherman Rotary and was a member and supporter of many other charitable organizations, and was a longtime congregant of the First Presbyterian Church. Bruce is survived by his loving wife of 45 years, Nancy McAtee; children, Michael (Lauren) and Rebecca (Calvin); grandchildren, Morris and Ruby; brother, Alfred (Robin); and, several nieces and nephews,family and friends, all of whom will surely miss the opportunity for just one more board game or round of cribbage.He was preceded in death by his parents and siblings, Colleen and Michael. Caring Cremation has taken place through the Frank E. Smith Funeral Home. Donations in Bruce's name can be made to the Robert K. Fox Family Y, 465 W 6th Ave, Lancaster, OH 43130; FairHope Hospice 282 Sells Rd. Lancaster, OH 43130; Big Brothers Big Sisters, United Way, or the charity of your choice. Online condolences can be made at www.funeralhome.com

Caring Cremation has taken place through the Frank E. Smith Funeral Home. Online condolences can be made at www.funeralhome.com

There will be a celebration of Bruce and his life on Sunday, July 11, at the Goslin Center in Alley Park. Hours are from 1-5pm with a program at 2pm when people can share memories and stories.


Published by Lancaster Eagle-Gazette from Feb. 12 to Jun. 20, 2021.
To plant trees in memory, please visit the Sympathy Store.
MEMORIAL EVENTS
To offer your sympathy during this difficult time, you can now have memorial trees planted in a National Forest in memory of your loved one.
Funeral services provided by:
Frank E. Smith Funeral Home and Crematory
MAKE A DONATION
Please consider a donation as requested by the family.
MEMORIES & CONDOLENCES
Sponsored by Frank E. Smith Funeral Home and Crematory.
6 Entries
may bruce rest in peace, god bless, prayers
tom arter
Coworker
February 16, 2021
I was fortunate to be on the Y Board and it’s President when Bruce was the Director of the Y. Mr. McAtee was a wonderful leader and essential to the Y merging and renovation. I have always thought that he was a gift to Lancaster and Fairfield County. My sincere condolences to his family on his passing. After retirement we would by chance meet in the Fitness Center and he would tell me so proudly about what his kids were up to. He is one of my heroes.
Ronald Heiber
Friend
February 15, 2021
Nancy,
Sending my condolences and strength and peace in your grief. I remember Bruce as one of the kindest people I've ever met.
Kathy Rexford
Friend
February 14, 2021
Bruce was a dedicated Councilman by taking time to research and address neighborhood issues. We are so sorry to hear of his passing.
Sandy and Larry Dow
February 14, 2021
Nancy and family, I was so sorry to hear of Bruce's passing. May God give you comfort and peace as you celebrate his wonderful life. Prayers for strength for you as you grieve.
Susie Bloom
Friend
February 13, 2021
As the days and weeks pass, and as you return to life's routine, may you continue to feel comforted by the love and support of family and friends.
Theresa Corral
Acquaintance
February 13, 2021
Showing 1 - 6 of 6 results