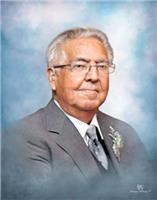 BORN
1936
DIED
2021
FUNERAL HOME
Yaksich-Long Funeral Home
1310 S 2Nd St
Raton, NM
Antonio "Tony" Encinias, 85, of Raton, passed away peacefully Friday, April 9, 2021 at his home surrounded by his loving family.
Tony was born March 18, 1936 to the late Jacobo I. Encinias and Ramona Esquibel Encinias in Las Vegas, N.M.
He resided in Las Vegas, N.M. until moving to Raton, N.M. in 1975 where he worked for the Raton Natural Gas Company from 1975 to 2003.
He was a veteran of the United States Navy serving in Iwakuni, Japan. Tony served as a Raton City Commissioner for two years and as Mayor Pro-tem for two years. He was a member of the Raton Kiwanis Club, served as Raton School Board president from 1987 to 1989, was a member of the Community Action Program and NM Jaycees in Las Vegas.
He was a Little League coach in Las Vegas and Raton; he performed in plays at the Schuler Theater and was a loyal supporter of Raton athletics and was an avid fisherman.
He was preceded in death by his wife Josefina "Josie" Martinez Encinias in 2017; his parents; brother Frank Encinias; and sisters, Marie Bishop, Dolores Juarez, Delia Gallegos, and Phyllis Rodriguez.
Tony is survived by his three daughters, Antonia Kueffer husband Charlie, Lupita Encinias husband BF Maharrey, Christine Valentini husband Larry; five sons, Lawrence Encinias, Edward Encinias wife Josie, John Encinias, Paul Encinias, and Alex Encinias wife Julie; his sisters, Theresa husband Ruben Archuleta, and Marcie husband Leo Lovato; his brother-in-law Pete Martinez wife Grace; and by his beloved 13 grandchildren; 21 great-grandchildren; many cherished nephews, nieces and cousins, and many special friends.
Tony will be laid to rest at the National Cemetery in Santa Fe, N.M., at a later date.
Arrangements for Antonio "Tony" Encinias are under the direction of the Yaksich-Long Funeral Home of Raton.
To plant trees in memory, please visit our Sympathy Store.
Published by Las Vegas Optic from Apr. 20 to Apr. 21, 2021.
MEMORIAL EVENTS
No memorial events are currently scheduled.
To offer your sympathy during this difficult time, you can now have memorial trees planted in a National Forest in memory of your loved one.
Funeral services provided by:
Yaksich-Long Funeral Home
MEMORIES & CONDOLENCES
2 Entries
so sorry for your loss i remember your parents were always such good people to our family growing up
TED VIGIL
Neighbor
April 22, 2021
My Condolences go out to the Encinias Families. May Tony Rest In Peace
Elaine Ortega (Tafoya)
Elaine Ortega
Friend
April 20, 2021
Showing 1 - 2 of 2 results