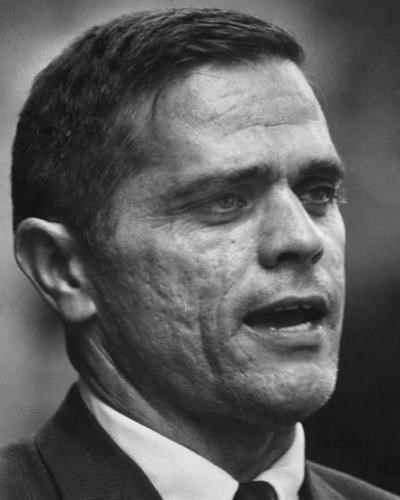 BORN
1924
DIED
2018
December 11, 1924 - May 11, 2018 The Reverend Buckner Coe of Lake Forest, formally of Laguna Beach and Claremont, CA. passed away peacefully on May 11 surrounded by members of his family. He was 93 years old. Rev. Buckner (Buck) Coe was a sixth generation minister. The son of The Rev. Albert Buckner Coe and Katharine Chalmers Coe, he was born in Boston Mass. A graduate of Yale University and the Yale Divinity School, Buck spent a long career serving as pastor at various churches thourghout the country. This included the Claremont United Church of Christ, Claremont, CA. in the early 1970s. As a pastor, Buck was very outspoken on issues of peace and social justice. He marched with Martin Luther King in Selma,1965, led a fair housing campaign in the Chicago north shore suburbs, and led campaigns against the Vietnam War in Chicago and Claremont. His last job before retirement was working for the United Farmworker Ministry on behalf of the United Farm Workers Union. Buckner Coe is survived by his wife, Judy, whose love and care for him had no bounds. He is also survived by his sister, The Rev. Ansley Coe Throckmorton; his children, Andy Coe (Liz); the Rev. Karen Chalmers Coe; Jonathan Coe (Liz); Sara Coe (Bill) and his two grandsons, Ryan Coe and Jackson Buckner Coe. He was predeceased by his wife, Kathryn Dowley Coe and his brother, the Rev. Chalmers Coe. A service to celebrate Buck's life will be held on June 16th, 11:00AM at the Neighborhood Congregational church (NCC) 340 St. Ann's Drive, Laguna Beach, Calif. 92651. In lieu of flowers the family asks that contributions be made to JOY! The social outreach work of the NCC, to the above address in Rev. Coe's name.
Published by Los Angeles Times on May 27, 2018.
To plant trees in memory, please visit the Sympathy Store.
MEMORIAL EVENTS
Jun
16
Celebration of Life
11:00a.m.
Neighborhood Congregational church
340 St. Ann's Drive, Laguna Beach, CA
MAKE A DONATION
MEMORIES & CONDOLENCES
4 Entries
I am truly sorry for your loss. May the God of comfort give you peace and strength during this difficult time. Psalms 29:11.
Cheryl
January 4, 2019
May our Heavenly Father grant you the peace and comfort that is needed at this most difficult time. Psalms 83/18
May 31, 2018
My deepest sympathy to the family and friends. The passing of a loved one is never easy to deal with. God keeps our loved ones in his unforgettable memory. May God's words at Hosea 13:14 comfort you in the days to come and give hope to see those we lost again.
May 31, 2018
With deepest sympathy to the Coe Family during your time of grief...God is for us a refuge and strength, a help that is readily found in times of distress...May God provide you with peace and comfort to endure the days ahead.
DR
May 29, 2018
Showing 1 - 4 of 4 results