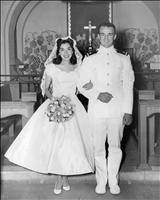 Delia Jimenez Jokanovich passed away on October 15, 2009. She had been receiving medical treatment for bile duct cancer since being diagnosed in March, 2008. She was 74 years old.

Delia was the daughter of the late Henry S. Jimenez and Hortencia (Constancio) Jimenez. Her parents and brother, Henry, had moved from Texas to Mexico City in 1930. She was born on June 19, 1935 in the Tacuba neighborhood of Mexico City. Her Family moved back to Texas when she was nine years old and then moved to Cleveland, Ohio where she attended St. Stephens Elementary School through the sixth grade. Her Family then moved to Los Angeles where she completed seventh and eighth grades at St. Mary's Elementary School. She enrolled in Sacred Heart High School, where she completed the ninth grade before transferring to Belmont High School. Delia had the dearest of friends from Belmont, and they remained dear friends throughout their lives.

In their senior year at Belmont, Delia and Peter Jokanovich were in the same Spanish class and had adjoining desks. After a 4 1/2 year courtship, they were married on June 4, 1958 in Annapolis, Maryland, and recently celebrated their Fifty-first wedding anniversary. They resided in Annapolis, Maryland; Long Beach, California; Sasebo, Japan; Seattle, Washington; Trona, California; and since 1968, San Pedro, California.

Delia graduated with a bachelor's degree in business in 1957 from Woodbury University in Los Angeles. After their three children were well settled in school, she earned a teaching credential from Cal State Dominguez Hills and taught second and third grades at Barton Hill Elementary School in San Pedro for over 20 years. She loved teaching at Barton Hill and her students and colleagues loved her. She was dedicated to her students and took great satisfaction in their educational progress. In later years, former students would go out of their way to thank her for what she did for them; she cherished this. Some of her dearest friends were teachers and staff at Barton Hill. They socialized over her twenty plus teaching years and during her retirement. They truly enjoyed each other's company in the good times and supported each other through the difficult times. She loved them.

Delia was a devoted and loving Mother to Nick (Iris) Jokanovich, Lisa (Paul) Norling, and Christina (Peter) Veverka. In recent years, she was blessed with three grandchildren, Max and Mia Norling, and Roman Veverka. She adored them. Her life revolved around her Family and friends. She also enjoyed music, dancing, travel, novels, lunch with friends, and good movies. She was a kind, loving, charitable, generous, and fun person who was a joy to be around, a lovely, lovely lady!

In addition to her husband, Peter, children, grandchildren, and their families, Delia is survived by her brother, Henry Jimenez, and his family of Cypress, California.

Shortly before her passing, Delia received Holy Communion and the Last Rites of the Catholic Church. She had a very strong Christian Faith and was extremely grateful for, and comforted by, the prayers of her friends, family, and strangers during her illness.

After her passing, while still in her hospital room, her immediate family prayed for the repose of her soul and her everlasting life in Heaven.

She is an Angel! We miss her beyond words!

Remembrances may be made in her memory to your favorite charity.
Published by Los Angeles Times on Dec. 6, 2009.
To plant trees in memory, please visit the Sympathy Store.
MEMORIAL EVENTS
To offer your sympathy during this difficult time, you can now have memorial trees planted in a National Forest in memory of your loved one.
MAKE A DONATION
MEMORIES & CONDOLENCES
Sponsored by Delia's Family.
9 Entries
I was blessed to have her as my Godmother and that is a very special honor for me.
Love to you all.

Richard Lee Haggen
Richard Haggen
March 10, 2012
anne SuytAR
December 24, 2009
Pete: Sad for you and your famiy. Our thoughts and prayers are with you. Mike and Joyce Dallam Kunkletown, PA
December 9, 2009
angel of god will miss her forever
kyle edward jimenez
December 7, 2009
May your hearts soon be filled with wonderful memories of joyful times together as you celebrate a life well lived
Edward Jimenez
December 7, 2009
Pete;
So sorry to hear of your wife's passing. John Williams '59
San Diego
December 7, 2009
Peter, Please accept my belated condolences regarding the loss of your beloved Delia. Be comforted in that she at home with Jesus in Heaven. Know that God is with you and your family as you grieve her loss.

Jim and Carol Cartwright
Jim Cartwright
December 7, 2009
Peter, I am so sad about the loss of your dear wife, Delia, and the grief you and your family are going through during this difficult time. My wife Gay and I send our sincerest sympathy and prayers for you to be strong. Your teammate and tackle, Don Boecker
Donald Vaux Boecker
December 7, 2009
our prayers are with you and your family at this time,we were sorry to hear of your loss.
helen and henrys niece rita henderson from ohio.
rita henderson
December 6, 2009
Showing 1 - 9 of 9 results