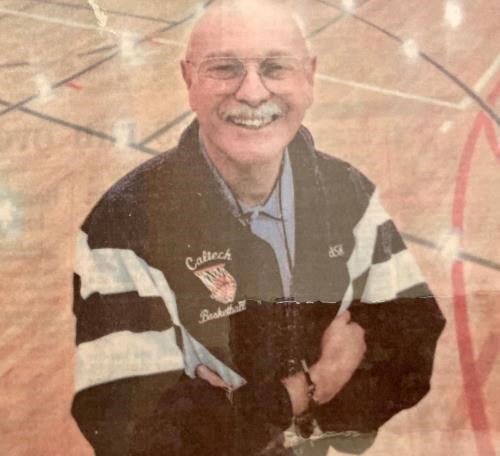 January 18, 1926 - April 24, 2021 Hall of Fame basketball Coach Eugene Pomeroy "Mean Gene" Victor passed away peacefully on April 24, 2021 at the age of 95.Coach Victor was a brilliant innovator in the game of basketball. In 1953, he helped invent the passing game and power flex offenses. His 1957 El Monte High School team won the California State championship at a time when all schools competed against each other, regardless of size limits. Later, while coaching at Caltech, he produced 'The Five Man Passing Game' video series, using his team to demonstrate the concepts. Gene coached for 57 years, including 15 years at Caltech in Pasadena. He was elected to six basketball Halls of Fames: the California Community College Hall of Fame, the National Association of Basketball Coaches, the CIF Hall of Fame, the Helms Athletic Hall of Fame, the Citizens Bank Hall of Fame, and the Hall of Fame at Mt. San Antonio College, where he coached for 28 years. For 50 years Gene was also a familiar face at Southern California's racetracks. He spent many a morning pouring over the racing form, handicapping the action at Del Mar, Santa Anita, and Hollywood Park, cheering his picks on to victory, surrounded by his friends, many of whom were fellow coaches.A stern taskmaster in the gym, Gene was a loving, generous man of great integrity and kindness, and he will be dearly missed by all who knew him.He is survived by his wife of 38 years, Jennifer Kimball Victor, his three sons Dennis, Jeff, and Bruce Victor, eight grandchildren, and eight great-grandchildren.In lieu of flowers, the family suggests donations be made to a charity of your choice.
Published by Los Angeles Times on Jun. 6, 2021.
To plant trees in memory, please visit the Sympathy Store.
MEMORIAL EVENTS
To offer your sympathy during this difficult time, you can now have memorial trees planted in a National Forest in memory of your loved one.
MAKE A DONATION
Please consider a donation as requested by the family.
MEMORIES & CONDOLENCES
0 Entries
Be the first to post a memory or condolences.