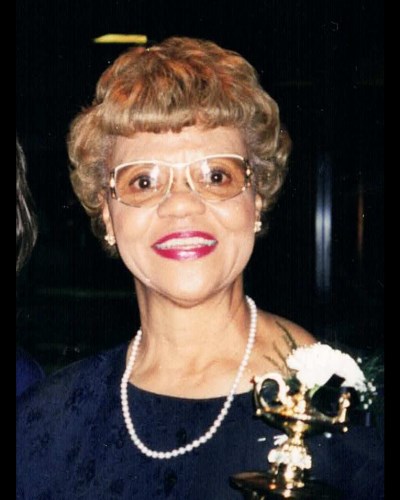 ABOUT
Susan Miller Dorsey High School
FUNERAL HOME
Angelus Funeral Home
3875 South Crenshaw Boulevard
Los Angeles, CA
October 19, 1939 - January 10, 2021 Eva Janet (DeGrate) Green was born on October 19, 1939 in Waco, Texas to Mae Ella Harvey and Oliver DeGrate Jr. She moved to Los Angeles when she was nine years old and lived with her Uncle Jack and Aunt Willie. She joined the Baptist Church community, and graduated from Dorsey High School in Los Angeles. She married Rudolph "Rudy" Green and became a lifelong member of St. Jerome Catholic Church where she attended and served faithfully. To this union, two sons were born: Derrick and Timothy. In 1975, while raising her sons, Eva pursued her education and attended CSULA, obtaining a degree in Business Administration. The following year, she received a Master of Science Degree in School Management and Administration from Pepperdine University. Eva was employed by LAUSD for 35 years. She began her career as a teacher, climbed the ladder of success to achieve positions as an administrator, Assistant Principal, and retired as a Principal.Eva had a passion for orchids. She was a member of the American Orchid Society and successfully bred a beautiful, small orchid, which had bright yellow flowers. She named it "Eva Sunshine". After retirement from Los Angeles Unified School District, she continued her passion for work by becoming a Notary Public. In keeping with her love for gardening, she also started a landscaping business. She was also an active member in the Ladera Heights Association. Eva would later say that she was busier after retirement and enjoyed her life more than ever. Eva has now reunited with her son Derrick, her parents, and her beloved Grandmother whom she remembered fondly. She will be deeply missed by her many close friends and especially by her beloved son, Timothy Steven Green.Eva's funeral memorial was on March 6, 2021 at Angelus Funeral Home with Burial at Lincoln Cemetery in Carson.
Published by Los Angeles Times from Mar. 11 to Mar. 14, 2021.
To plant trees in memory, please visit the Sympathy Store.
MEMORIAL EVENTS
To offer your sympathy during this difficult time, you can now have memorial trees planted in a National Forest in memory of your loved one.
Funeral services provided by:
Angelus Funeral Home
MAKE A DONATION
MEMORIES & CONDOLENCES
Sponsored by Angelus Funeral Home.
1 Entry
Eva was a beautiful person, kind, encouraging, professional and caring. I knew Eva Green as a colleague in the LAUSD Division of Adult and Continuing Education. Eva was devoted to her various school communities. She created a positive learning environment to empower her students, staff and community. Eva Green was very much a lady and professional. I will miss her sunny personality and beautiful spirit.