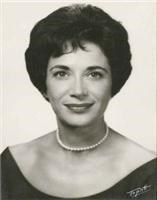 FUNERAL HOME
Groman Eden Mortuary | Eden Memorial Park
11500 Sepulveda Blvd
Mission Hills, CA
February 18, 1918 - January 29, 2015
Freya Baker Miller, 96, passed away peacefully, surrounded by her family, in her beloved Malibu Home, a few weeks shy of her 97th Birthday.
Born during the Great Flu Pandemic, Freya was the oldest of 3 children. Her parents, Nathan and Fannie, immigrated from the Pale of Settlement and met while rolling cigars in Pittsburgh, PA. Her parents epitomized the American Dream. Teaching each other English, working together to build a nest egg, the two immigrants eventually bought a small grocery store. The Baker Family lived upstairs and all the family worked in the store. Freya, and her two brothers, were educated in the superb public school system. She loved to recollect how she was taught to dance by a young Gene Kelly. Bright and beautiful, Freya showed a tremendous talent for art and design. Her talent was supported by her parents, who sent her to design college in New York City.
In 1940, Freya was wooed by and married the love of her life, Jay C. Miller, a newly commissioned ensign in the U.S. Navy. In 1942, her first son, William, was born while Jay was away serving aboard the USS Tuscaloosa during the first Arctic convoys of World War II. In 1944, her daughter, Suzanne, was born in Norfolk, Virginia, where her husband was stationed as a training officer for the Higgins landing crafts that would soon embark for the beaches of Normandy.
Following the War, Freya and Jay settled in Pittsburgh, where Jay displayed his tremendous entrepreneurial talents. Soon, however, they decided that the future lay in the West, and in 1949, drove Route 66 to settle in West Los Angeles, where their third child, Michael, was born in 1950.
Thriving in the extraordinary spirit of mid-century Los Angeles, where opportunity abounded, and hard work rewarded, Freya and Jay continued their journey together. During this time, Freya studied painting and eventually committed herself to becoming a full-time artist. As her friends and family know, her paintings are extraordinary, but Freya preferred to give her art to her family and friends and to display them on the walls of her Malibu home.
In 2005, her great love, Jay, passed away a few months short of his 92nd Birthday. Broken-hearted, Freya continued to enjoy the love of her family and grandchildren. Unfortunately, she suffered from Alzheimer's Dementia and this disease took its toll, ultimately resulting in her death.
She is survived by her three children, her grandchildren, Janell and Alisa, Alexis, Stephen and Jacob, and her three great grandchildren, Jordyn, Taylor and Wyatt.
We are so thankful to have been her children and to have loved and been loved by her.
Mother, you will be missed and we are blessed that your memory will be a part of our lives forever.
Funeral Services will be held at Groman Eden Mortuary on February 8th.
Published by Los Angeles Times on Feb. 3, 2015.
To plant trees in memory, please visit our Sympathy Store.
MEMORIAL EVENTS
To offer your sympathy during this difficult time, you can now have memorial trees planted in a National Forest in memory of your loved one.
Funeral services provided by:
Groman Eden Mortuary | Eden Memorial Park
MAKE A DONATION
MEMORIES & CONDOLENCES
1 Entry
Please accept my condolences for your loss. May God grant you peace and comfort. Psalms 83 : 18, Psalms 147 : 3.
G
February 3, 2015
Showing 1 - 1 of 1 results