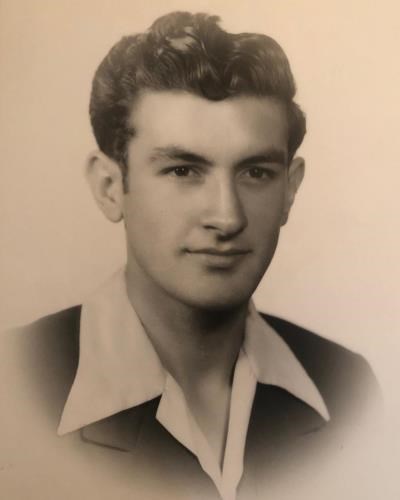 September 29, 1921 - March 7, 2020 Harry was born in Los Angeles to Greek immigrants, Kaliopi and Alex. He was a proud veteran of World War 2, and an ingenious, inventive, artistic craftsman. He had a green thumb that produced beautiful orchids and enormous zinnias. He groomed his bonsai collection to perfection. Harry was renown for his sublime grilled souvlakia and homemade fresh peach ice cream. He was happiest working with his hands, whatever the project or challenge. He loved spending time in his shop, working on his own creations or repairing something for a friend. It was a rarity to see him without a pipe in his mouth and a dog by his side. He loved hiking the hills around his beloved John Lautner home, stopping to visit with neighbors along the way. Many knew him as the proprietor of the Beachwood Market that was founded by his father Alex and his uncles nearly 100 years ago in the 1920's. Harry was pre-deceased by his loving parents, his beautiful first wife Pauline, his sweet son Paul, accomplished second wife Martha, and his two artistic brothers George and Dino. His daughter Cally, her children Alexander and Pauline, his stepson James, step-grandson Sean and nieces and nephews survive him. An event to honor Harry's life will be held by invitation.
Published by Los Angeles Times from Mar. 10 to Mar. 12, 2020.
To plant trees in memory, please visit the Sympathy Store.
MEMORIAL EVENTS
To offer your sympathy during this difficult time, you can now have memorial trees planted in a National Forest in memory of your loved one.
MAKE A DONATION
MEMORIES & CONDOLENCES
4 Entries
When our family moved to Hollywoodland in 1958, my mom hired Harry to make a Lazy Susan for our round dining table. We used it for decades.
Lynn Shepodd
Neighbor
September 13, 2020
I am so sorry to hear of Harrys passing my condolences to his family and his many friends . I work at the Beechwood market for over 10 years and found Harry to be the kindest most gentle person I have ever met in my entire life . A true Renaissance man who could do anything he put his mind to . Will miss him deeply .
Gary Shiozaki
Friend
July 19, 2020
Heartbroken to learn that Harry is no longer in this world. A beautiful soul, charming, giving and gracious. He and my mother were related, sharing a Greek heritage that allowed them to connect even though she had emigrated to Australia in the 1960s and they never met. I was so excited to meet him for the first time when I was 22 and travelling after graduation. He opened his heart and his house to welcome me and introduce me to the family. I was thrilled to meet my American relatives even though we were related several times removed. Harry and I stayed in touch over the years, and he subsequently met other members of my family. My mother spoke with him often, holding on to the connection with the family that emigrated to America so many years ago. I loved how Harry embraced his Greekness, his creativity, his passion for the outdoors, the ability to stop and smell the roses. I especially loved how he was oblivious to ageing. For me, he was eternally youthful, and getting older just meant he could do even more of what he loved. An incredible role model and a wonderful man with a big heart that had space for everyone. Vale.
Anne Pappas
April 21, 2020
Our sincere condolences are sent to all of Harry's family and friends.
Harry was a very kind and sweet man - he is much missed at the Sylvan house where my mother has lived since October 2019. He shared his birthday decorations that month with her and then chocolate whenever he was indulging himself. Because he couldn't pass up a wood project opportunity, Harry put together a doll house for Betty's great granddaughter (3-1/2 yrs old then). My husband Mark and Harry shared stories of Farmers Market and Beachwood Market and their mutual love of LA history. It was easy to love Harry and we were grateful to get to know him, short as our friendship was. May all be comforted by many happy memories of this lovely man! Rest in peace, Harry!
Gail Panatier
March 15, 2020
Showing 1 - 4 of 4 results