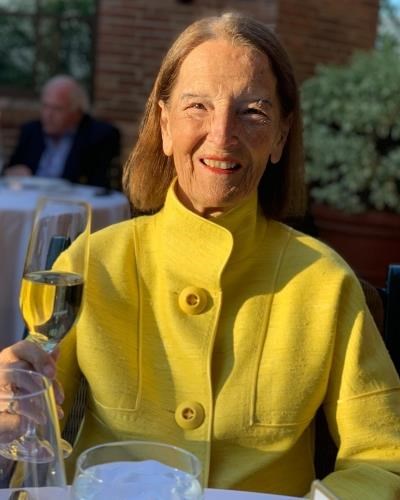 BORN
1928
DIED
2021
August 6, 1928 - October 10, 2021 Joanne Thompson Caillouette died peacefully with her three children at her side in Hoag Hospital, Newport Beach, California early the morning of October 10, 2021. She was 93 years old.Joan Thompson was born in Tacoma, Washington in the summer of 1928. She spent her childhood growing up with a younger brother, Buck Thompson, and two sisters, Jane Russell and Kay Enbom, on the edge of Lake Steilacoom in Lakewood, Washington. Quite an athlete, Joan excelled at riding and jumping horses, swimming and diving. In sixth grade, Joan met her ultimate husband of some 65 years, Jim Caillouette. They went to school together in Lakewood and got married soon after college on Joan's family property on the Puget Sound, named Silverbow Farm. An excellent student, Joan attended Smith College in Northampton, Massachusetts, then Reed College in Portland, Oregon and graduated with Jim from the University of Puget Sound in Tacoma. Joan studied to get her teaching certificate so she could teach first grade while Jim completed medical school at the University of Washington in Seattle. A few years later, they moved to Altadena, California and ultimately to Pasadena, where Joan occupied the same wonderful house for over sixty years.Joan and Jim enjoyed local trips with their three children, Laure Nichols (Lakebay, WA), Jamie Caillouette, MD (Laguna Beach, CA) and Anne Lawler (Atherton, CA), European vacations with Friends of The Huntington and donated decades of extensive volunteer work with Planned Parenthood of Pasadena and as a docent with the Huntington Library, Art Museum and Botanical Gardens. In addition, Joan served on the Boards of The Huntington Board of Overseers, Pasadena Garden Club and Pasadena Planned Parenthood.Joan's main pastimes and joys have been playing tennis with dear friends until age 91, reading and gardening. She will be remembered for her intelligent, friendly, hardworking and beautiful presence. Joan is survived by her brother, Buck Thompson and her three children, Laure, Jamie and Anne along with ten grandchildren and six great grandchildren. Donations in Joan's name may be made to Pasadena Planned Parenthood and the Huntington Library, Art Museum and Botanical Gardens.
Published by Los Angeles Times from Oct. 16 to Oct. 17, 2021.
To plant trees in memory, please visit the Sympathy Store.
MEMORIAL EVENTS
To offer your sympathy during this difficult time, you can now have memorial trees planted in a National Forest in memory of your loved one.
MAKE A DONATION
MEMORIES & CONDOLENCES
3 Entries
Joan is someone who always gave her best to her causes. I admired and enjoyed her immensely as a friend. We had many satisfying experiences with the Pasadena Garden Club. My deepest sympathy to her family.
Peggy Stewart
October 19, 2021
So enjoyed playing tennis at her home for several years and enjoying birthday celebrations. She was a wonderful person!
eleanor sturzenacker
October 18, 2021
Joan was an incredible lady, and quite a hostess. I met her through Michael Novarese, Maggie Murray, and Georgiana Erskine.
Robert Nelson
October 16, 2021
Showing 1 - 3 of 3 results