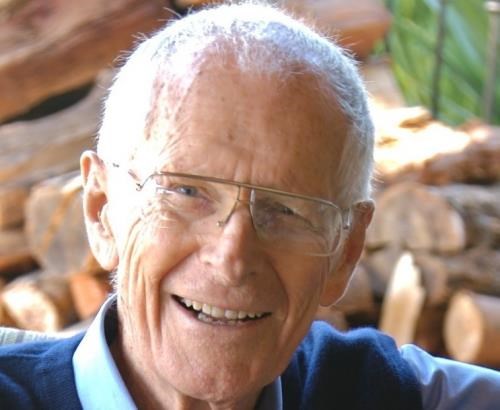 BORN
1920
DIED
2019
September 19, 1920 - July 22, 2019 Jack McRoskey, an extraordinary father, husband, and friend who founded several successful manufacturing and real estate businesses in Southern California, died on July 22nd, surrounded by his family. He was 98. A lifelong Californian, Jack was known by friends and family alike for his energy, enthusiasm, and integrity. He was a passionate athlete, entrepreneur, and patriot whose self-deprecating wit, hearty laugh, and thoughtfulness were a joy to all around him. Jack was born to Leonard McRoskey and Helen Smith McRoskey on September 19, 1920, in San Mateo, California. Jack enjoyed a close relationship with his brother, Len. The two were best friends and successful business partners – first in real estate and later in manufacturing. Businesses of Jack and Len included Mack Brothers Partnership, Wen-Mac Corp, and Republic Tool and Manufacturing Corp. The manufacturing companies made consumer products ranging from lawn and garden equipment to children's toys. At his death, Jack held numerous patents, and at least one of his inventions is featured in the Smithsonian Institute. Jack met his wife Cathie, the love of his life, when he was in college at UCLA. The two celebrated their 70th anniversary this past February. In addition to Cathie, Jack is survived by his 5 children (Cece, Pete, Joe, Guy, and Dan), 15 grandchildren, and 11 great-grandchildren (with 2 more on the way). Throughout his life, Jack put family first. Even with the demands of his many successful business ventures, Jack always prioritized family life, which was often characterized by spirited games of golf, tennis, handball, skiing – and plenty of good food and lively conversation. Jack always had the time for a cup of coffee and a chat with any child or grandchild. Jack served his country with honor during World War II as a member of the U.S. Army Division 515 Parachute Infantry, the 13th Airborne, and briefly the 82nd Airborne, rising to the level of Major. Jack was honorably discharged when the war ended and always held a special fondness and respect for our servicemen and women. Jack believed in giving back to the community. He was a founding member of St. Martin of Tours Church in Los Angeles and The Church of the Nativity in Rancho Santa Fe. He also served as Vice Chair of the County of San Diego Economic Advisory Board, Executive Committee Member of University City Planning Group, and a member of the Rancho Santa Fe Public Information Committee. Jack loved God and served Him faithfully during his years on earth. He lived his life with passion, generosity, and goodness. Jack will be sorely missed. Mass of the Resurrection will be held on Monday, August 5th, at 10:30 AM at The Church of the Nativity in Rancho Santa Fe. In lieu of flowers, the family suggests donations to The Church of the Nativity or to the USO.
Published by Los Angeles Times from Jul. 27 to Jul. 28, 2019.
To plant trees in memory, please visit the Sympathy Store.
MEMORIAL EVENTS
Aug
5
Funeral Mass
10:30a.m.
The Church of the Nativity
Rancho Santa Fe, CA
MAKE A DONATION
MEMORIES & CONDOLENCES
1 Entry
Cece, know that I am here for you, in any way I can help. I pray that you, Cathy, and your whole family will find peace knowing that your father has been warmly welcomed into God's embrace.
Mari Cox
July 27, 2019
Showing 1 - 1 of 1 results