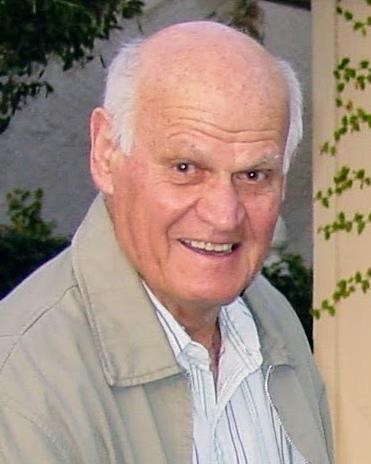 BORN
1929
DIED
2018
FUNERAL HOME
Hillside Memorial Park & Mortuary
6001 Centinela Ave
Los Angeles, CA
May 16, 1929 - February 28, 2018 Murray Gechtman passed away Feb. 28, 2018 in Los Angeles, Ca. He was 88. He is survived by his wife of 57+ years, Lucille; children Joe, Dan and Risa; and grandchildren Andie, Grant, Dylan, Eliana, and Ariel. He was a beloved husband, father, grandfather, and friend. He was gentle and kind and gave to charity anonymously. Moishe, as his friends called him, was born and raised in Brighton Beach, NY, the son of Russian immigrants Isadore & Sonia. He graduated Brooklyn Tech in '46, and CCNY in '50, where he played on the basketball team. He served in the Korean War, stationed in Alaska with the Army Corps of Engineers. He moved to L.A. in his 20s and in '55 met Lucille, the love of his life, on a blind date; they were married in Dec '60. He earned a Master of Science (Mathematics) from USC in '61. Many of his childhood mates, including Murray Neidorf, Harvey Roth, and Irwin Spector, also moved out to L.A. and proved to be cherished lifelong friends. Murray taught math at Pierce College for 40+ years, many as the Chair of the Dept. He was a man of principle; he wrote several textbooks which were unapologetically difficult. His publishers asked him to "dumb them down" but he refused. Murray loved the sublime: Classical music, the outdoors, tennis, the arts, teaching. He loved fruit, and preferred a rotten nectarine over a ripe peach. He enjoyed book clubs, had season tickets to the theater and Philharmonic. But nothing gave him more joy than his family, especially his grandchildren. He wrote each of his family members a poem on their birthdays. They were filled with love, wisdom, and life advice. After many years, he collected all the poetry he had written and published a book he titled, "A Family's Life in Poems." There will be a service to celebrate his life Sunday, 3/11 at 2pm at Hillside Mortuary. In lieu of flowers, donations can be made to the Sierra Club or Doctors Without Borders.
Published by Los Angeles Times on Mar. 10, 2018.
To plant trees in memory, please visit the Sympathy Store.
MEMORIAL EVENTS
Mar
11
Celebration of Life
2:00p.m.
Hillside Memorial Park & Mortuary
6001 Centinela Ave, Los Angeles, CA
Funeral services provided by:
Hillside Memorial Park & Mortuary
MAKE A DONATION
Please consider a donation as requested by the family.
MEMORIES & CONDOLENCES
Sponsored by Hillside Memorial Park & Mortuary.
1 Entry
Sending love, thoughts and prayers to you and your family during this difficult time. Professor Gechtman was my algebra teacher back in 1971 (summer). He got me thru a difficult semester prior to me being drafted. He was kind, caring, and able to explain difficult concepts to the student. I greatly benefited from knowing this mensch.
Dr. Leland S. Shapiro, Professor Emeritus
Pierce College
March 13, 2018
Showing 1 - 1 of 1 results