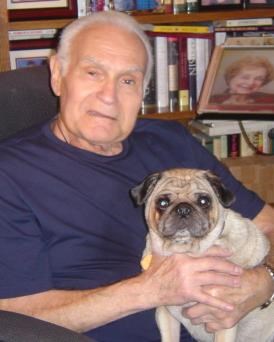 BORN
1925
DIED
2021
ABOUT
Susan Miller Dorsey High School
September 28, 1925 - January 8, 2021 Murray Jacob Smith died on Friday, January 8th, 2021 at the age of 95. He passed away in Encino, California after contracting Covid.He was born September 28th, 1925, in Brooklyn, New York, the third son of Mordka (Mottel) and Brajndia (Bronsha) Siemiatycki, later to become Max and Bertha Smith, as they assimilated to life in America after coming over from Poland in 1921. The family of five moved to Los Angeles, California in 1936.Mel, as Murray was known, grew up in the Boyle Heights area of Los Angeles and graduated from Dorsey High School in 1943. He was "Rugged Mel Smith", as a guard on the football team.He joined the Army in March of 1944 after having started his college education at Occidental College. He served overseas in World War II in Brussels, Belgium, where he drove a tank for the 61st Signal Battalion. He was honorably discharged in April, 1946, and returned to California.In September, 1946, Mel continued his college education at The University of Southern California, and graduated in 1950.He met the love of his life, Dinah Joy Wolfson, on Christmas Night, 1946. They were married on June 19th, 1948 and remained married for 62 years until Dinah's death. They were inseparable for their 64 years together.Mel and Dinah had four children, son Aaron, son Daniel, son Jeremy, and finally, their daughter Melanie.Mel loved his family first and was always the happiest when they were with him. He was generous and charitable. Due to Aaron's heart problems, which caused his death, Mel and Dinah regularly donated to Children's Hospital Los Angeles. Mel loved history, studied the Holocaust, collected original historical documents, and researched his interests avidly. He was proud of what he found during these studies, and shared numerous and interesting information with the family. He was proudest, though, of his children, grandchildren and great grandchildren.He is predeceased by wife Dinah, eldest son Aaron, and his older brothers, Sol and Dave.He is survived by his loving family, son Danny (granddaughter Kimberly Loya (Chris), great-granddaughter Melrose, and grandson Aaron), son Jeremy (granddaughter Tamara, great-granddaughter Mayah and great-grandson Cameron, granddaughter Marisa and great-grandson Kai, and grandson Jordan), and daughter Melanie Bronstein (John) (granddaughter Nicole (Bronstein) Mack (Jonny), and great-granddaughter Chloe, grandson Jacob and granddaughter Alisa).A memorial is planned for immediate family only, due to Covid restrictions, at Hillside Memorial Park on January 19th.He leaves with all our love and positive memories.
Published by Los Angeles Times on Jan. 13, 2021.
To plant trees in memory, please visit the Sympathy Store.
MEMORIAL EVENTS
Jan
19
Memorial service
Hillside Memorial Park
CA
MAKE A DONATION
MEMORIES & CONDOLENCES
2 Entries
The world became smaller on 01/08/21, when we lost you. Forever in our hearts and minds. You will be greatly missed, Gramps! Love you! Rest In Peace! ❤
Marisa
Family
January 13, 2021
I didn’t know him for long but for the short time I did I can say with full heart that he was an amazing person.
Avi
Friend
January 13, 2021
Showing 1 - 2 of 2 results