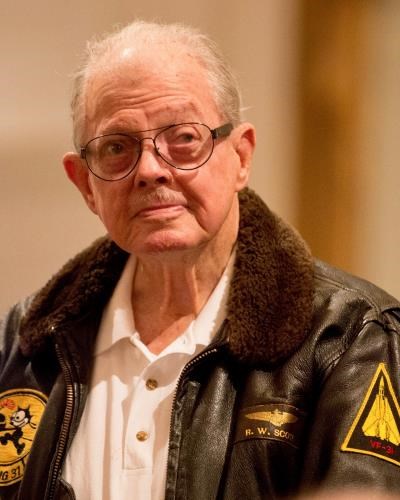 BORN
1928
DIED
2019
ABOUT
Susan Miller Dorsey High School
March 17, 1928 - February 22, 2019 Robert Warren Scott (Rob) was born in Los Angeles, CA, on March 17, 1928 to George and Marion Scott. Rob passed away on Friday, Feb. 22, 2019, just three weeks shy of his 91st birthday after suffering a serious fall while on a walk. Rob was raised in South Los Angeles and graduated as a multiple sports letterman from Dorsey High School. His family along with his younger sister Jacquie, moved to San Gabriel in 1947. Rob joined the Navy in 1948, earned his wings and became a Naval Fighter Pilot flying both the F4U Corsair and the F9F Panther, the Navy's first jet fighter. He had 126 carrier landings including 6 on the Midway. While home on leave during Christmas of 1949 he met the absolute love of his life Marilyn Jean Thatcher or "Hoopie" as he affectionately referred to her. They were married at St. Phillips Church in Pasadena, CA, on Oct. 8, 1950 and began a remarkable relationship that lasted 68 years. They raised five sons and created a home and family legacy that will live for generations. After leaving the Navy Rob went to work for the Los Angeles County Road Department. While he continued to work Rob attended night school classes for eleven years. As a result of his studies and work experience he passed the RE (Registered Engineer) state exam and was ultimately promoted to the level of Supervising Civil Engineer. He loved his work and was proud of what he accomplished at the County Road Department. After extensive traveling Rob and "Hoop" got involved with Engaged Encounter (EE) and soon became the most prolific presenting couple in the international organization doing 12 to 15 weekends per year. During their time with EE they presented to over 4,000 couples that were preparing for marriage. They were "rock stars" in the organization! More recently they started and regularly facilitated "Souls Without Wrinkles" a sharing and Bible study group for seniors at St. Phillips Catholic Church. The family gathered last March to celebrate Rob's 90th birthday. It was an extraordinary gathering and celebration of a life well lived. It was a classic Scott get-together and Rob truly enjoyed the day. Rob, your sacrifice, caring and love of your wife and this family are a legacy that will live on for generations. You made a difference! Robert Warren Scott is survived by his wife Marilyn, sons: Gary (Mary), Wayne (Cindy), Craig (Loree), Brian (Linda), Mark (Rachel) and Jeff (Jo). He also leaves 10 grandchildren and 13 great-grandchildren…and countless others who considered him as a father figure in their lives. Memorial Mass at St. Phillip the Apostle in Pasadena on Saturday, March 2, 2019 at 1:00 p.m. In lieu of flowers you are asked to make a donation to Children's Hospital or any children's service organization.

Published by Los Angeles Times from Feb. 27 to Mar. 1, 2019.
To plant trees in memory, please visit the Sympathy Store.
MEMORIAL EVENTS
Mar
2
Memorial Mass
1:00p.m.
St. Phillip the Apostle
Pasadena, CA
MAKE A DONATION
MEMORIES & CONDOLENCES
6 Entries
My condolences to the family on the loss of your loved one. May the God of all comfort be with you during your time of sorrow. (Psalm 145:19)
March 4, 2019
Thinking of the Scott family at this time of grieving. May all the wonderful memories of Mr. Scott keep you lifted in spirit.
CMS Music Booster Family
March 2, 2019
I grew up with the Scott boys, and always held Mr. Scott in very high regard. He was a wonderful man, and treating all of us boys as if we were his own. Much love to the entire Scott family in your time of loss, and will add Mr. Scott to my daily prayer roll call.
Dan Nolan
February 28, 2019
Our condolences to Rob's family. We have learned a lot from him and will miss him. Rob was a special man to his wife, family and friends. We will miss him.
Willie and Susan Goff
February 28, 2019
To all who have known Rob, we will miss you. To the Scott Family.
Willie and Susan Goff
February 28, 2019
My sincere condolences to the family. May you find comfort in knowing God hears your prayers and sees your tears. Isaiah 38:5
February 28, 2019
Showing 1 - 6 of 6 results