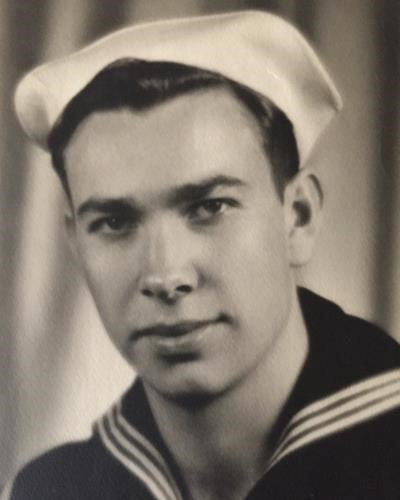 BORN
1927
DIED
2019
March 8, 1927 - June 8, 2019 Robert James Tyldesley passed from us peacefully with hospice care June 8, 2019 in Encinitas, California. Bob was a native of Santa Monica, the only child and first generation American of English/Canadian parents, Fred and Helen Sutton Tyldesley. After graduating from UCLA Class of 1950, Bob's Lambda Chi Alpha brothers became his lasting friends and he became "Uncle Bobby" to their families. He was a great organizer of "Poker Nights" with his fraternity brothers and a yearly "Day out at Del Mar Racecourse"…a margarita in hand and a smile on his face! Bob served in the U.S. Navy from 1945-1946 aboard the USS West Virginia and the USS Indiana.. He was always happiest near water. His great passion was music, particularly classical and opera and he held season tickets for the LA Philharmonic and Hollywood Bowl among others. He was particularly proud of having been in the audience at a concert conducted by Serge Koussevitzky. One could be guided to Bob's room at his long-term care home by the sounds of Brahms or Britten from his CD player!His visitors never tired of hearing Bob tell tales from his 'trip around the world', which followed his recovery from a near-fatal fall into a ship's hold in 1953 while he was working at a summer job on a Great Lakes freighter before returning to graduate classes. Many ports of call and life-long friends were made on that journey. Bob's business career was spent in hotel management on both the East and West Coasts which followed his natural inclination to travel, be near the ocean and be connected with people, as his work took him to New York City, San Francisco and Santa Monica, California.Bob had happy memories from travels to England visiting Tyldesley cousins in Cheshire and Lancashire. Another memorable trip taken was with his good friend Bob Broad (RAF, Ret.), who he met in Samoa, to see the D-Day Beaches at Normandy. He could not speak of it without shedding tears. Many thanks to all of you dear friends and the Tyldesley family members, who kept in touch and brought the outside world to Bob through visits, calls and notes over the 7 years of his stay while recovering from a stroke. Particular thanks to Marianne Waldrop (Col., USMC, Ret.) for her weekly visits and also Chaplain Ollis Mozon, (CAPT., USN, Ret.) and a Lambda Chi, who baptized and prayed with Bob regularly.No funeral services are planned and his memorial service will be held privately at sea when Bob's ashes are taken to their final resting place as he requested. His only surviving relatives are his Tyldesley cousins living in the UK. Contributions in his memory may be made to the United States Navy League Foundation, 2300 Wilson Blvd., Suite 200, Arlington, VA 22201-5424.Bon Voyage, dear friend…and Fair Winds and Following Seas, Sailor!
Published by Los Angeles Times from Jun. 22 to Jun. 23, 2019.
To plant trees in memory, please visit the Sympathy Store.
MEMORIAL EVENTS
To offer your sympathy during this difficult time, you can now have memorial trees planted in a National Forest in memory of your loved one.
MAKE A DONATION
MEMORIES & CONDOLENCES
2 Entries
We would like to express our deepest sympathy from all of us at Navy League of the United States. May his legacy live on in your memories. Godspeed...
July 24, 2019
The Travelling Man is back on his travels. You were an amazing man Bob, we are honoured to call you family. God bless. Ian, Michelle, Cameron and Oliver Tyldesley
Ian Tyldesley
June 22, 2019
Showing 1 - 2 of 2 results