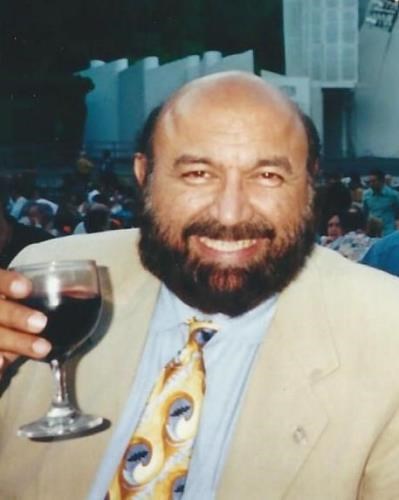 BORN
1945
DIED
2016
FUNERAL HOME
Forest Lawn - Glendale
1712 S. Glendale Avenue
Glendale, CA
Our hero, our mentor Dr. Stan Sharma passed away Tuesday, September 27, with his family by his side. A man of deep intelligence, compassion and charisma he was the bedrock of his family and the pillar of his community. Stan Sharma's life and career reflects a relentless quest for knowledge, a Buddhist calmness of mind, and a medical and entrepreneurial creativity. He was the embodiment of generosity and was beloved by thousands of people. Born in Suva, Fiji, the eldest son of Ram Bhawan and Bidya Wati Sharma, Stan Sharma Ph.D., J.D., immigrated with his family to the United States in 1964. He pursued his doctorate and became an Associate Professor at UCLA. The Founder and CEO of American Health Services he made significant contributions to the revolution of health care delivery. His medical and research facilities provide affordable and widely available services to communities in need, particularly in his home state of California. A respected academic, a published scientist, and a man of insatiable curiosity, Dr. Stan Sharma drew people together. Known for his irreverent sense of humor and wit, he was also extremely gentle and gave unconditional love to all. He is survived by his son Seanjay Ramanand Sharma, his three sisters Surekha Bahl, Mintra Sharma Wilson, and Chandra Lekha Livingston, one brother Deoand Sharma aka Frank Martini, his nieces and nephews, and by countless others who deeply feel and mourn his passing. Funeral services will be held on Thursday, October 6, from 9am to 12pm, at Forest Lawn Hollywood Hills in the Hall of Liberty Chapel (6300 Forest Lawn Dr., L.A., CA 90068). A motorcade will escort those who wish to attend the 12:30pm cremation at Forest Lawn Glendale (1712 S. Glendale Avenue, Glendale, CA 91205). A gathering to celebrate his life will follow.
Published by Los Angeles Times from Oct. 3 to Oct. 5, 2016.
To plant trees in memory, please visit the Sympathy Store.
MEMORIAL EVENTS
Oct
6
Wake
Dr. Stan Sharma's beach home in Playa Del Re
CA
Oct
6
Funeral service
9:00a.m. - 12:00p.m.
Forest Lawn Hollywood Hills in the Hall of Liberty Chapel
6300 Forest Lawn Dr,, LA,, CA
Funeral services provided by:
Forest Lawn - Glendale
MAKE A DONATION
MEMORIES & CONDOLENCES
Sponsored by Forest Lawn - Glendale.
27 Entries
In loving memory of a wonderful person, mentor and friend. Another year has passed and I miss you more than ever. Please continue to watch over us. I love you and miss you always.
Mary Ann Laramee
Friend
September 21, 2019
Stan, I miss you, you were gone to soon. You have me an opportunity to begin my life for a second time after incarceration. Im grateful to have met you and your truly missed by not only myself but humanity. Thank you!
Keith Wagoner
Friend
September 21, 2019
I so miss you Stan,not a day goes by that I don't think about you or tell someone how Awsome you are,my head knows but my heart knows I can talk to you always.
I miss you so much my mentor,my brother,and my friend.
Love you so much
Donna ( Paris Hilton) and I know ( Nicki misses you as much).
All my love.
Donna Morrison
Sister
June 30, 2018
Dear Sharma Family I have been living in Thailand for the last 14 years and unfortunately have lost our communications in that time frame. I just learned of Stan's passing and he really touched my heart during our friendship and I will always miss his good nature and friendship There will always be a space in my heart for your family. I really feel your loss and will always have fond memories. Stay well Warm Regards Jay Solomon
Jay Solomon
Friend
June 4, 2018
OMG, I still miss you daily, as it gets nearer to opening the Rancho Cordova clinic, you are first and foremost on my mind. I will make you proud to continue your legacy. We are not open yet but we are closer than ever.... I will continue to move forward in your memory.... I remember a wise man once told me, "Do not stress, everything will work out like it is suppose to" !!!!
February 20, 2018
As the days and weeks pass, and as you return to life's routine, may you continue to feel comforted by the love and support of family and friends. May the God of comfort and peace help you through this difficult time. Read John 6:40.
JM
February 11, 2018
My sincere thoughts and prayers go out to all of his family . Stan helped so many people, people from all walks of life . My you rest peacefully Stan.
CC
Friend
October 9, 2016
My deepest sympathy goes out to the family.

As the days and weeks pass, and as you return to life's routine, may you continue to feel comforted by the love and support of family and friends.
Mary Ann Laramee
October 9, 2016
As the days and weeks pass, and as you return to life's routine, may you continue to feel comforted by the love and support of family and friends.
October 9, 2016
My condolences to the Sharma family. There are no words that can replace the pain and sorrow you're feeling at this moment but look around you and you'll see Stan, in everything you do. His spirit will remain to guide you into that next chapter and will forever be in your hearts.
Micki Robinson Sister to Liz Crouch
October 7, 2016
Azusa clinic will miss you we loved and cared about you so much. Thank you for being you,you were an inspiration in my life there is only one "Stan" you will be missed. Martha Baca. Azusa clinic
martha baca
October 6, 2016
You will be missed so much. Ruben and martha
martha baca
October 6, 2016
Thank you my friend for making a difference in my life, may you rest in peace and God bless us all because we have lost a friend, and mentor.
Keith Wagoner
October 6, 2016
Stan was a compassionate and giving man and a pillar of the community. He will be greatly missed.
Shahla & Kat Karimi
Acquaintance
October 6, 2016
On the part of Dr and Mrs Bernard Jorge we wish to offer our deepest sympathies to Dr Sharma's family and friends. It was an honor and pleasure to be part of his employee family and he will be sorely missed.
October 6, 2016
You are my best friend my big brother my mentor in life. I love you with all my heart, you taught me to be gracious and kind and humble and a billion other things we will truly miss the kind heart intelligent loving human being that you are and always will be.we were blessed the day we met you. Rest in peace my friend you will forever be in our hearts.
Donna & Don Morrison
Friend
October 5, 2016
He was just like a candle in the darkest night, somebody to impress and to make you follow, a kind soul and trough friend impossible to replace, you be missed and will be in my prays...
Otto Attila Fisher
Friend
October 4, 2016
We are shocked and numb at Stan'ssudden demise. Will miss his smile,laughter and joyfulness. He always made us comfortable. This year has been especially hard on the family. Stan was a pillar of pride and strength to the family and friends. We cherish all the time spent with him and the family. Moments and memories we will always remember. Gopal and Poonam Batra
Gopal Batra
Family Friend
October 4, 2016
Stan was a marvel: intelligent, high-energy, compassionate, courageous, and truly an Adaptive and Innovative Business Leader. As an ABL Member for the past seven years - in both our LA and San Francisco Round Tables, he was a true leader in demonstrating how an affordable "integrated healthcare"
model (providing primary care, behavioral care, and addiction treatment) was the right approach to offer patients, even when others "in power" didn't get it. Right to the end, he was developing new ways of caring for patients that will - as his legacy - improve the lives of thousands. It's truly been an honor to know Stan, and several of his co-workers. He will be forever in our hearts, Mimi Grant/President/ABL Organization
Mimi Grant
Friend
October 3, 2016
Lovable with a great smile, Stan will always be remembered as a kind and generous person. When our Mom retired at the age of 75 she still wanted to work and Stan empolyed her at one of his clinics and in his his travels he always remembered her with lovely postcards. Rest in peace Stan.
Stephanie and Helen
Family Friend
October 3, 2016
A very sad goodbye to a gentle SOUL
who genuinely cared for his fellow
human beings. Most of all, a very humble
human being. May you rest in peace.

Roshni Singh and family.
Roshni Singh
Family Friend
October 3, 2016
My condolences to his family and friends, may he rest peacefully in his eternal dream.
Emily Moreno
Coworker
October 3, 2016
I would like to send my most sincere and deepest condolences to Dr. Shama's family, friends, and co-workers. Dr. Sharma was like no other. He was a very caring, generous,giving,person. He may be gone from us. But, he will never be forgotten. May you rest in peace Dr. Sharma. Til we meet again in paradise.
Judith Montoya
Judith Montoya
Coworker
October 2, 2016
Dr. Sharma,
Thank you for all that you did for our family. You helped our family and I truly appreciate you and thank you from the bottom of my heart. You will truly be missed our friend.

Love,
Mona
Mona Alexander
Friend
October 1, 2016
Our prayers are with you
Jasbir and skip
Coworker
September 30, 2016
Stan is bigger than life, intelligent, sensitive, funny and loyal just to name a few qualities. It's because of him that I and so many others are where we are in life. I can never repay him. My condolences to his Family that he loved so much. My heart aches for you, please know that so many of us are here for you and will be there to help in anyway needed going forward.

With Love and Respect