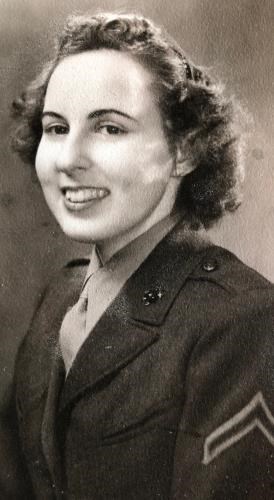 BORN
1921
DIED
2018
June 26, 1921 - September 12, 2018 Stella Goren, age 97, died September 12, 2018, surrounded by love from all who knew her. Stella battled her way through life. Growing up in New Haven, Conn., she went to work at an early age to help her family survive the Great Depression. She showed artistic talent from a young age and was accepted to the Yale School of Art, but her family could not afford to send her to school. Instead, Stella supported the war effort by working in an Army recruiting office, and in 1943, when the Marines first allowed women to join its ranks, she immediately enlisted. She rose to the rank of Sergeant and earned honors for her conduct and sharpshooting prowess. Stella married and had a son, and the three moved out west to Los Angeles. When the marriage ended, she embraced her role as a single mother, a rarity in the 1950s. She then married Samuel Goren, who became her husband of 53 years, and had two more children. She worked to help support her family as a typist and a legal secretary, finally retiring at the age of 62 so she could finally spend time on her artistic pursuits of painting, weaving, writing, sculpting, knitting, and many others too numerous to mention. At the age of 80, Stella answered an ad from a local gym and took up boxing, a sport which became her passion for the remainder of her life. She was beloved by all the gym members and by her sparring partners, who readily agreed to her one rule "I can hit you but you can't hit me." Totally fair. She is survived by her three children, Jan (Beth), Michael (Harriet) and Leora (Brenda), five grandchildren, Gina (Josh), Eric (Romi), Jessica (Jason), Dagny and Jeremy, her six great-grandchildren, Alexa, Max, Isabel, Lily, Spencer and Finley, her sister Jane, and her caretaker John. She was predeceased in life by her husband Sam and her sister Lucille. In lieu of flowers or gifts, donations can be made to START Animal Rescue (startrescue.org), an organization dear to Stella's heart. 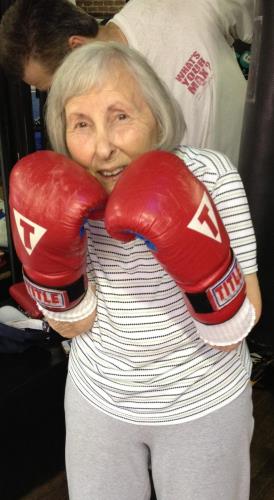 To plant trees in memory, please visit our Sympathy Store.
Published by Los Angeles Times from Sep. 13 to Sep. 16, 2018.
MEMORIAL EVENTS
No memorial events are currently scheduled.
To offer your sympathy during this difficult time, you can now have memorial trees planted in a National Forest in memory of your loved one.
MEMORIES & CONDOLENCES
3 Entries
I remember going to LA to see Uncle Sam and Aunt Stella as a young boy. I was given Lox, which I grew to love. Enjoyed the visit throughout the years and spending time listening to the stories she told. I will always have special memories.
Brett Byard
September 19, 2018
SEMPER FIDELIS SGT STELLA GOREN, USMC...

YOU HAVE FINISHED YOUR COURSE AND ANSWERED
YOUR FINAL MUSTER. WE, YOUR-SISTER MARINES, KNOW THAT YOU HAVE BEEN CALLED TO "GUARD THE STREETS OF HEAVEN!"

GOD SPEED MARINE AND WE ARE PROUD THAT YOU
SERVED WITH US.

YOU ARE PRECIOUS IN MY EYES AND HONORED AND I LOVE YOU...ISAIAH 43:4