Tony Pope
FUNERAL HOME
Forest Lawn Memorial-Parks & Mortuaries
Nine Locations, CA
Pope, Tony
Loved by many family and friends, he is survived by this wife, Pat Lentz, their children Melissa, Alex and Marcella Lentz-Pope. His brother and sister, Tom, Jay, Kelly and Kappy. Tony was one of the lucky guys that did what he loved for living. He came to Los Angeles in 1973 and began a highly successful career as a voice over talent. Many of us have heard Tony, even if we never met him. He was the voice of Goofy for Disney for over eleven years, with over 25 Gold and Platinum albums to his credit. He worked on hundreds of films, television and cartoons, including "Who Framed Roger Rabbit" and he is the first voice you hear at the opening of "Back To The Future." He is the voice of the Cheshire cat and the King of Hearts in the Alice in Wonderland ride at Disneyland. He loved working for Mattel Toys and Fisher Price and took great pride in having the toy Chef Tony named after him. He is also loved by children all over the world as the voice of Furby. He was developing a one man show based on the life of George Burns. His mastery of voices and his unique sense of humor make Tony a talent who will be sorely missed. The good news is, even if he's gone, all we have to do is watch one of the many movies he worked on, or switch on a Furby, to hear his voice, have a good laugh, and appreciate his wonderful gifts. Originally from Cleveland, Ohio, Tony was an avid Cleveland Indians and Browns fan, even holding season to tickets to their games while residing in Los Angeles. He enjoyed playing sports and was voted MVP of his Allstar Softball team at the age of 46. He took great pleasure in coaching for the Girls' Softball League. A memorial service is scheduled for Saturday at Forest Lawn Cemetery-Hollywood Hills. A visitation will be from 10:30 to 2:30 at White Memorial Building, with graveside service at 3:00. In lieu of flowers the family is requesting donations be made to the TonyPope Memorial Fund. Checks should be made out to LACHSA Foundation, with the Tony Pope Memorial with "The Tony Pope Memorial Fund noted on the memo line sent to: Tony Pope Memorial Fund LACHSA Foundation Library North, room 1034 5151 State University Drive Los Angeles, CA 90032 Or donors may call the Foundation office at 323-343-2554
Published by Los Angeles Times on Feb. 13, 2004.
To plant trees in memory, please visit our Sympathy Store.
MEMORIAL EVENTS
To offer your sympathy during this difficult time, you can now have memorial trees planted in a National Forest in memory of your loved one.
Funeral services provided by:
Forest Lawn Memorial-Parks & Mortuaries
MAKE A DONATION
MEMORIES & CONDOLENCES
6 Entries
I say that he has done a great job on acting out. I haven't heard from him since I was little.
Meya Collings
Significant Other
June 4, 2021
Hello,

Just a big fan of his work, passing by to pay my respects to the memory of the man who's voice I can still hear in my mind, and that I have to cherish for many years to come on many different DVD's.

You will be missed Mr. Pope...
David
February 21, 2004
We knew Tony for the years he volunteered at the Sierra Madre Girls Softball Association. He was a great coach, and a true friend. Although we did not spend much time together outside of softball, we shared the same love for our girls and the game. We will miss him dearly.

Cory and Roxana Privett
Roxana & Cory Privett
February 21, 2004
I am an old friend of Tony's brother Tom and fairly new friend of Tony's sister Kappy. I had the pleasure of meeting Tony back in February of 2002 when he was back home in Willoughby to visit his ailing mom, who sadly passed away just this past July. I have posted to the photo gallery a photo I took of Tony and his mom that day I met him at the nursing home where Kay was in rehab after hospitalization. It was such a shock to hear of Tony's passing. My deepest condolences to the whole family. His presence and talents will be greatly missed.
Bonnie Kinkopf
February 16, 2004 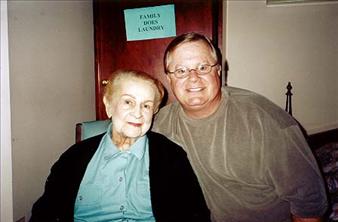 February 16, 2004
Generous, kind, fair, and jovial. A lover of life and his work. I always felt "received" when I saw Tony. I also know for certain that he loved -- cherished -- his family above all. Gone way too soon. Say goodnight, Gracie.