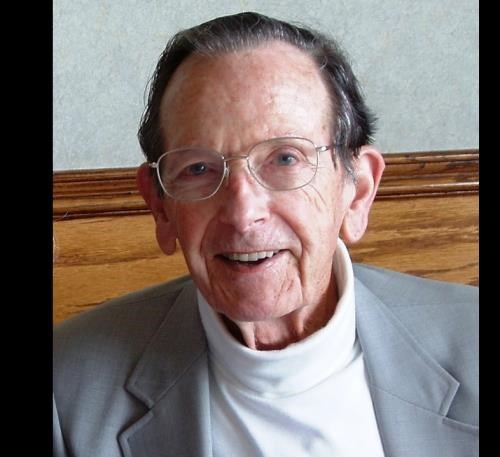 BORN
1920
DIED
2018
July 27, 1920 - January 15, 2018 Wendell Harter, a longtime resident of Manhattan Beach since 1948, passed away peacefully at his home on January 15, 2018. He died from heart failure at the age of 97 years. A retired Aeronautical Engineer, he was employed at Northrop Corporation in the Aircraft Division for over forty years. His career included serving as manager of System Effectiveness and Safety, which covered Human Factors, in addition to Reliability, Maintainability and System Safety for all aircraft programs of the division. He was an Associate Fellow of the American Institute of Aeronautics and Astronautics, and author of a number of technical papers presented at national symposiums. Born in San Diego, California, to Rev. Logan and Elizabeth Harter, a former teacher, Wendell was the youngest of four children. As a lifetime resident of California, he received his B.S. and M.S. degrees from the California Institute of Technology in Pasadena. It was at Pasadena's Holliston Methodist Church that he met and later married his wife, Madelyn Pyle. They raised three children, Lowell, Gordon and Janet, and were happily married for 73 years. Wendell enjoyed being involved in community activities and organizations. He and his family joined the Manhattan Beach Community Church in June, 1948. His jobs there were many, including Moderator, Finance Board Chairman, Superintendent, Youth Group Sponsor, and leading many of its Capital Fund Raising Campaigns. He also served as Southern California regional Director for the World Federalist Association; Chairman and Emeritus member of the Torrance South-Bay YMCA's Board of Directors; President of the Manhattan Beach Sister City Committee; President of AFS South Bay's student exchange program; Program Chairman and International Service Director for the Manhattan Beach Rotary Club; and was Area Coordinator for the Manhattan Beach Neighborhood Watch program. For his community work and dedication, he received the "Golden Book of Distinguished Service Award" from the L. A. Metropolitan YMCA; the Parks and Recreation Commission's Youth Services Award from the City of Manhattan Beach; both he and his wife, Madelyn, received the honorary Rose & Scroll Award from the Manhattan Beach Chamber of Commerce; and both also received the Edward Rawson Global Citizen Award from Citizens for Global Solutions for their 60 years of work to abolish war, protect rights and freedom, and solve humanity's collective problems. For recreation, Wendell enjoyed camping, hiking, ballroom dancing, travel, and sailboat racing. During his 40 years of racing his Lightning class sailboat, the Paddlin Madelyn, he won over 300 trophies, including the Pacific Coast Championships, and the North American Championships' Presidents Cup. Over the years, his wife, Madelyn, children, and one of his nephews and grandchildren were often his crew. He loved and was loved by his three children: Lowell Harter (married to Maria), Janet Shaw (married to Gregory), and deceased son, Dr. Gordon Harter; his four grandchildren: Thomas Harter (wife, Christina), Carol Bartholio (husband, Dr. Craig Bartholio), Kevin Harter, and Evan Shaw; and six great-grandchildren: Chloe, Noah & Hannah Bartholio, and Christian, Nathan & Aria Harter. The celebration of his life will be held on February 24th, at the Manhattan Beach Community Church, 303 S. Peck Ave., Manhattan Beach. Service is at 11:30am. In lieu of flowers, donations may be made in Wendell's honor to: the Torrance-South Bay YMCA, Manhattan Beach Community Church, World Federalist Movement (web address www.wfm-igp.org), or to your favorite charity.
Published by Los Angeles Times from Feb. 14 to Feb. 18, 2018.
To plant trees in memory, please visit our Sympathy Store.
MEMORIAL EVENTS
Feb
24
Celebration of Life
11:30a.m.
Manhattan Beach Community Church
303 S. Peck Ave., Manhattan Beach, CA
MAKE A DONATION
Please consider a donation as requested by the family.
MEMORIES & CONDOLENCES
2 Entries
As you remember your love one, may your treasured memories continue to bring you peace, comfort, and strength to endure.
June 4, 2018
Please accept my heartfelt sympathy. May the God "who binds up the broken hearted and comforts all who mourn" sustain you during this difficult time. Isaiah 61:1,2
February 15, 2018
Showing 1 - 2 of 2 results