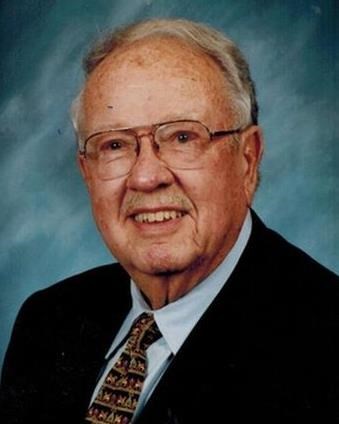 BORN
1917
DIED
2018
January 11, 1917 - November 3, 2018 Bill was born in San Bernardino, CA, to Lillian and Edgar Huyck. After two years, they moved to Los Angeles where Bill attended public schools, graduating from Fairfax High School in 1935 as Student Body President. He graduated from USC in 1940, receiving a BA degree in Business Administration. He served in World War II as a bombardier with the Air Corps in the South Pacific, completing 52 combat missions from Guadalcanal to the Southern Philippines. Later he was stationed in Albuquerque where he met and married Coramae Anderson. After a blind date and courtship of several months, it grew to 75 years of marriage. Bill was president of the Aseptic Thermo Indicator Company, which was sold to Warner-Lambert in 1978. Bill represented Beverly Hills and the Fairfax 59th Assembly District. He enjoyed these days as a member of the California State Legislature. From 1941-51, Bill was a Director of Coast Federal Bank – 50 years. He was Past Master of Henry Knox Masonic Lodge, member of Los Angeles Scottish Rites, past President of North Hollywood Rotary Club and served on the Board of Directors of Mutual Fire Insurance Company of Los Angeles, Past Master Counselor of the Hollywood Chapter of DeMolay and Founding Executive Secretary of the Bill of Rights Commemoration Committee. Bill and Coramae were blessed with two sons – Willard, Jr., who married Gloria Katz, and James, who married Dolores Hall. Then through the years came grandchildren Rebecca, Jonathan and Jason. Recent additions include great-grandson Bennett and great-granddaughter Lyla. Bill also leaves behind Bob Norris, nephew; Judy Stagnaro, niece; Julie Collins, great-niece; and Dan, Scott and Bob Huntsman, nephews – to mention a few. Bill was so proud of his family and he was a role model for everyone. A private Masonic graveside service will be held on November 8.
Published by Los Angeles Times from Nov. 6 to Nov. 7, 2018.
To plant trees in memory, please visit our Sympathy Store.
MEMORIAL EVENTS
To offer your sympathy during this difficult time, you can now have memorial trees planted in a National Forest in memory of your loved one.
MAKE A DONATION
MEMORIES & CONDOLENCES
3 Entries
I am so very sorry to hear about Bill's passing. I always loved the time I got to spend with him and Coramae whether it was RVing, sharing a meal out, the RV club or for business matters. He was the most impressive man I ever met. My prayers and thoughts will be with him and Coramae and I will miss him forever.
EDWARD BAUMAN
Friend
November 8, 2018
EDWARD BAUMAN
November 8, 2018
I am deeply sorry for your loss. God is good and merciful, he has given us a life span of 70 and 80 years if we are strong. Psalms 90:10. May your hearts be filled with wonderful memories of joyful times you shared together as you celebrate a life well lived and loved by many.
Annie
November 6, 2018
Showing 1 - 3 of 3 results