HERSHEY Ethel E. Winters, 89, formerly of Fredericksburg, passed away on Wednesday, April 11, 2012, at Country Meadows, Hershey. Richard D. Winters, her husband of over 60 years, died in January 2011. Born in Metuchen, N.J., she was the daughter of Robert and Lilian Fitch Estoppey, both deceased. Survivors include her son, Richard T. Winters, his wife, Diana, and their son, Jake; her daughter, Jill and husband, Edmund Peckelun; her sister, Doris Tidroski of Whiting, N.J. Her brother, Royden Estoppey, and sister, Marjorie Christopher, predeceased her. After graduating from Rutgers University, Ethel worked setting piece-rates for Western Electric Co. and for Rutgers University as a psychometrician. Ethel worked as office manager for her husband in R.D. Winters Supply Co. Inc. and R.D. Winters, Inc. for 25 years. After retirement, she continued working as his secretary in compilation of his WWII memories in preparation for the book Band of Brothers by Stephen Ambrose, for the HBO miniseries Band of Brothers, and assisted in his memoir Beyond Band of Brothers. As time permitted she was an avid reader, gardener, and volunteer at Senior Meals and for the Hershey Public Library. Funeral services will be held at 10 a.m. on Friday, April 20, 2012, at Paul L. Gravenor Home For Funerals, 100 W. Main St., Ephrata 17522. The family will receive friends from 9 to 10 a.m. In remembrance, Ethel suggested that you donate a book or funds to your local libray. To offer your condolences visit gravenorhomeforfunerals.com
To plant trees in memory, please visit our Sympathy Store.
Published by Lebanon Daily News on Apr. 13, 2012.
MEMORIAL EVENTS
No memorial events are currently scheduled.
To offer your sympathy during this difficult time, you can now have memorial trees planted in a National Forest in memory of your loved one.
MAKE A DONATION
MEMORIES & CONDOLENCES
22 Entries
Ethel was a powerhouse of a woman. Even though she was not caught up in the hype of her husbands notoriety, she helped him every day to answer mail, assist in any way. Guarded him during Major Winters battle with Parkinson’s. She is missed.
Rosemary Clemens
Friend
April 8, 2021
Ethel Winters was a very strong woman. Her husband had Parkinsons disease. She protected him as this horrible disease caused him to have many problems. At times we didnt understand some of her restrictions on visitors time with Dick etc. Before she died I told her that my husband was diagnosed with Parkinsons disease. She said now you will understand what this disease is like. I now understand what she went through. She was a strong,devoted wife to a great and dearly loved man. She shared so much of her time with the public and those who adored her husband. Great lady!
Rosemary CClemens
Friend
April 8, 2019
I am sorry for your loss. I am very happy to think that she is with her true love.
Katie Rhodes
May 8, 2012
My condolences! We are loosing all the references, day after day...
Vitor Santos
April 20, 2012
the passing away of a generation which provided the freedom we enjoy really hurts me. Mr and Mrs Winters for me were examples of hard work, unselfishness en loyalty. Rest in Peace and be never forgotten.
Patrick de Groot
April 20, 2012
My condolences to The Winters family, with the gratitude and memory of such a fine woman, wife to Dick and Mother to you all.
Simon Welburn
April 17, 2012
Thanks you Mrs. Winters for sharing your husband's and your story to all of us. RIP to an American treasure. May future generations learn from your story.
April 16, 2012
God bless you and your husband. We are forever indebted to you and your generation.
John Williams
April 15, 2012
My deepest condolecens to the Winters family and friends. I comfort myself with the thought that Ethel and Dick are reunited again in Heaven, Rest in peace.
John Smeets
April 15, 2012
Heaven is much the richer now. Rest in peace Mrs. Winters, with your Major and all the angels.
Connie & Bob Andrews, New Jersey
April 14, 2012
Rest in peace Mrs. Winters. You and the Major where a inspiration to all of us. You the Army wife that waited for your husband to come home from the war. The Major a great leader who inspired us all!
David Vossburg
April 14, 2012
Very Sad condolences for the Winters Family from Gary and Marcela Carson, Seattle,WA. My father was a Sargent in his command from the beginning of Easy to Austria. Richard also knew my mother.
Gary Carson
April 14, 2012
Whomever decided that it was a good idea to include:"Till Death Do Us Part" in Wedding Vows really missed the Boat. The Major And Miss Ethel really showed the way. It's Up To All Of Us,Now!...Amen
Bob Golias
April 14, 2012
My sincere condolences to the Winters family and friends. I comfort myself with the thought that Ethel and Dick are reunited again. Rest in peace.
Simone Picozzi
April 13, 2012
My condolences to the Winters family.
My thoughts and prayers are with you.
Rest in Peace Mrs. Winters.
Boy Eysbroek
April 13, 2012
My thoughts and prayers to the entire Winters family... May you rest in peace with the Major...
David Dionne
April 13, 2012
We loved you Ethel. God bless you we know you are side by side with our wonderful friend Dick and all your pain is gone. RIP Ethel. Rosemary and Herm Clemens
Herman Clemens
April 13, 2012
My sincere condolences to you Jill on the passing of your
Mom. As you know, I loved her very much. She was the epitome of grace and class. I miss her greatly. Please accept my deepest sympathy and prayers.
Cole Kingseed
April 13, 2012 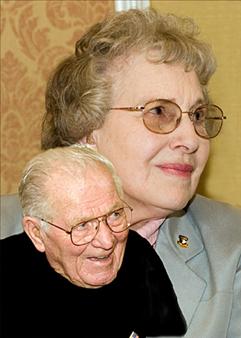 Peter van de Wal
April 13, 2012
Dear Winters family
Today I received the sad news Mrs. Winters has passed away. I had the honor and privilige to meet her some years ago when I visited Hershey with the Mayor of Eindhoven to honor Mr. Winters as honorary Citizen of Eindhoven, the town in Holland he and his men liberated in September 1944. In my thoughts and prayers I'm with you all. May she rest in Peace.
Peter van de Wal
April 13, 2012
My sincere condolences to the family and loved ones. I comfort myself with the thought that Ethel and Dick are reunited again. Rest in peace.
Ronald Ooms
April 13, 2012
God Bless you as you join Dick and your country's beloved hero in eternal rest and peace
Jean Klick, 17th Airborne
April 12, 2012
Showing 1 - 22 of 22 results