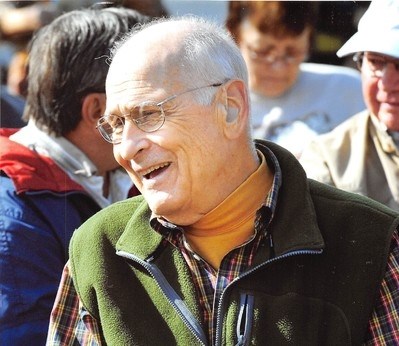 Richard was born in Lancaster, PA on November 20th, 1931 to Isaac and Bertha Charles. He graduated from Mc Caskey High School in Lancaster in 1949 and Franklin & Marshall College in 1953, with an A.B. in history. He served in the US Army from 1954-1956 as a Specialist, Third Class. Mr. Charles began his working career at the American Red Cross and later worked for Hamilton Watch Company in marketing and public relations. In 1974 Dick returned to his alma mater, Franklin & Marshall College as Director of Development. Concurrent with his responsibilities at F & M, he was an active volunteer for the American Cancer Society, becoming the Chairman of the Board of the Pennsylvania Division of ACS in 1984. Dick worked at Wilkes College as Director of Development as it was changing to a broader institution.

In 1988, Dick joined Lebanon Valley College as Vice President of Advancement. Dick was an elected Annville Township Commissioner, having run for office four times, for a tenure of fourteen years.

Upon his retirement from Lebanon Valley College in 1997, Dick co-founded the Franklin Consulting Group, serving institutions and communities in Central Pennsylvania for twenty years.

In 2014 Dick and his wife Pauline, moved to Cornwall Manor, surrounded by welcoming friends and a loving community. Even at Cornwall Manor, Dick could not resist the call of duty. In 2016, he won the election for Cornwall Borough Council, and loved serving until the day he died.

Memorial services will be held at 11:00 AM on Saturday, August 18, 2018 at Levi Zerr Chapel at Cornwall Manor. Inurnment will be held in Riverview Burial Park, Lancaster.

Published by Lebanon Daily News on Aug. 12, 2018.
To plant trees in memory, please visit the Sympathy Store.
MEMORIAL EVENTS
Aug
18
Memorial service
11:00a.m.
Levi Zerr Chapel at Cornwall Manor
PA
Funeral services provided by:
Kreamer Funeral Home & Crematory, Inc. - Annville
MAKE A DONATION
MEMORIES & CONDOLENCES
Sponsored by LDNews.com.
2 Entries
Dear Pauline and family: I just found out about Dick's passing. What a servant heart he had and what an impact he had at the American Cancer Society. We are forever grateful to him and he will live on by the work that he has done for others throughout his life!
Vicki Haake
September 13, 2018
Offering our deepest condolences during this difficult time.
The Staff of Kreamer Funeral Home
August 12, 2018
Showing 1 - 2 of 2 results