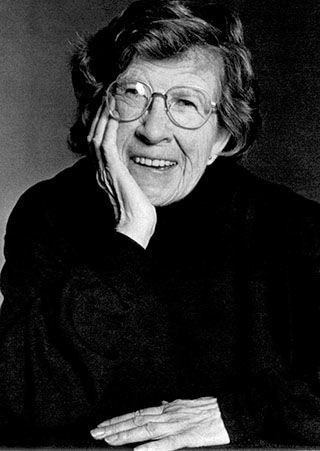 Janet Carson was born in Wheaton, Illinois, on August 30, 1926, to Lodor and Shellie Carson. She persevered through various physical disabilities to attain a life of success. After two years attending Albion College in Albion, MI, she entered the University of Illinois in Urbana as an art major graduating in 1950 with honors earning a BFA degree in fine arts with teacher certification. She went on to teach elementary art at Grandin, MO, Bangor, MI and Roxana, IL. In 1956, Janet completed a Master of Arts degree at Teachers College, Columbia University. She later entered Michigan State University where she completed a Master of Fine Arts degree in 1963. After 2 years teaching at Bemidji State College, she accepted a position at the University of Wisconsin in Eau Claire where she taught for 26 years and attained the rank of full professor.
Following retirement in 1991, Janet focused on her watercolor painting. In 2008, she mounted a show of her artwork at the Eau Claire Regional Arts Center, the proceeds of which were used to renovate the gallery, which was later renamed the Janet Carson Gallery. Janet wrote and published three books supporting the theme that small children are greatly aided by well taught art classes in the public schools. Her personal artwork was accepted in many juried art competitions. Her paintings and serigraphs are seen in various locations around the country as well as in the Eau Claire community.
Janet made a difference in the Eau Claire community in many ways including her participation in the Eau Claire Watercolor Artists, teaching English as a second language to both children and adults through Literacy Volunteers of America, and serving as an enthusiastic docent at the Chippewa Valley Museum.
Janet was a lifelong Methodist and founding member of Hope United Methodist Church in Eau Claire. She is preceded in death by her mother, father, and her sister, Elaine Huseth. Janet is survived by two nephews, a niece, and six grand nephews and nieces. A Celebration of Life Service will be held at 10:30 am, Saturday, December 14, at Hope United Methodist Church, 2233 Golf Road, Eau Claire. A reception will follow. In lieu of flowers, Janet requested memorials be sent to the United Methodist Foundation in Sun Prairie, WI, The Pablo Center at the Confluence in Eau Claire, or Hope United Methodist Church in Eau Claire, WI.