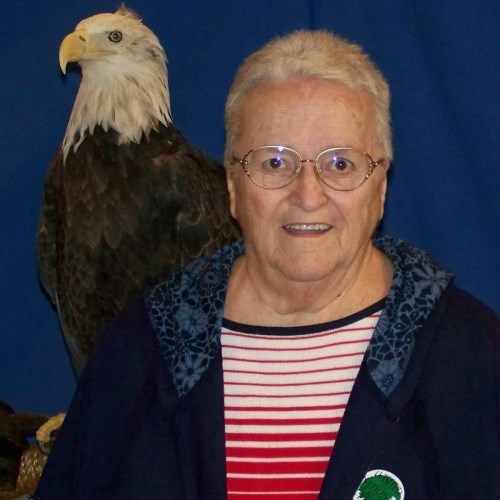 BORN
1933
DIED
2020
FUNERAL HOME
Olson Funeral Home & Cremation Service - MENOMONIE
615 WILSON AVE
Menomonie, WI
Joan L. Crosby, age 87, of Colfax, WI passed away Tuesday, Dec. 8, 2020 at The Neighbors of Dunn County in Menomonie.
She was born Sept. 5, 1933 in Colfax, WI to Leon and Alma (Kragness) Lunn. In 1951, she graduated from Colfax High School where she was proud of playing in the Colfax band.
On May 20, 1953, Joan married Dwight Crosby in Colfax, WI.
Joan enjoyed handiwork and crafts. If Dwight was combining oats, she would have embroidery or other handicrafts with her to work on until he would whistle to unload. She was as much a farmer as her husband. She did the feeding, cleaning milk dishes and tank. Her swollen misshaped knuckles are a testament to many times reminding calves it wasn't their turn. She drove tractors and helped unload hay until moving off the farm. Joan was very proud of having attended every Colfax Fair from before she was even born.
Joan was a 53 year member of the American Legion Auxiliary and held several offices in the local, county and district. She was also a member of Colfax Lutheran Church, Trinity Lutheran in Boyceville, the Happy Homemakers and Sherman Ladies Aid. While at Trinity in Boyceville and at Colfax Lutheran she held many Ladies Aid and Circle positions. Joan was a proud supporter of the Colfax Vikings even when her children attended Boyceville Schools. She kept track of all of her schoolmates and attended all of her class of 1951 reunions until COVID cancelled the 2020 reunion. She was keeper of the class information.
She enjoyed taking pictures at family events and on trips as well as baking bars for special occasions. She and her husband travelled after retiring from the farm. Joan was a wealth of information on the area and knew who lived where and would give a history of its origin. She loved to explore where different roads would lead as long as you had half a tank of gas. Joan was very proud of her Norwegian heritage traced back to the first king of Norway and would recite the Norwegian table prayer at family holidays.
Joan is survived by her daughters, Mary (Alan) Peterson of Ridgeland and Rose (Charles) Mueller of Colfax; her grandchildren, Chad (Jodi) Peterson of Menomonie; Bethany Peterson of Prairie Farm and Heidi (Travis) Ovsak of Amery; great-grandchildren, Logan, Brooklyn, Layne, Ivy, Keegan, Parker, Aspen, Colton, Easton and Kenzie; a great-great-granddaughter, Sophie; as well as other relatives and friends.
She was preceded in death by her parents; her husband Dwight Crosby; a son Richard Crosby; brothers, Rolf and Erling and infant sister Jeanne.
Private services will be held at 11:00 a.m. on Saturday, Dec. 12, 2020 at Olson Funeral Home in Menomonie, with Pastor Leslie Walck officiating. The service will be live streamed to Olson Funeral Home Facebook page. The family will host a Celebration of Life in the spring or summer after COVID.
To share a memory, please visit obituaries at www.olsonfuneral.com