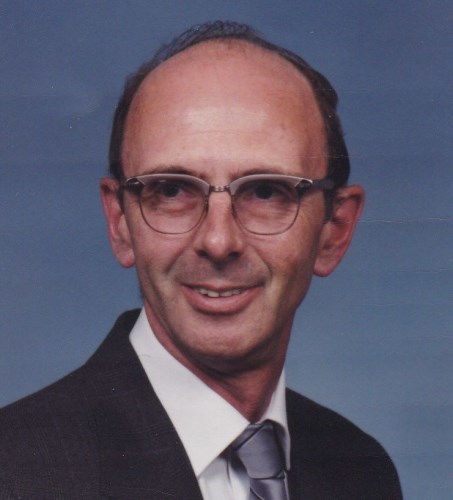 FUNERAL HOME
Anderson Funeral Home
312 S Stone St
Augusta, WI
Richard Lary Grimm, 81, lifelong resident of Eau Claire, passed away peacefully on Tuesday afternoon, July 20, 2021, at Prairie Pointe in Altoona.
Richard Lary Grimm, son of Raymond and Iva (Brown) Grimm was born on July 25, 1939. He was raised in Eau Claire where he graduated from Eau Claire High School. Following his graduation he enlisted in the U.S. Army and served most of his enlistment in Germany from February of 1958 until February of 1961. After his honorable discharge Dick returned to Eau Claire, where for 35 years he was employed as a machinist and welder for Cliff Industries of Eau Claire.
Dick was united in marriage to Irene Lange on Aug 26, 1967, at Concordia Lutheran Church in Eau Claire. Since his marriage he was a confirmed member of Concordia Lutheran Church where he enjoyed volunteering as usher.
Dick and Irene lived in their home in Eau Claire until the fall of 2019 when they moved into Heritage Assisted Living in Eau Claire. Due to several health issues Dick had been a resident of Prairie Pointe in Altoona for the past year-and-a-half.
Throughout his life Dick enjoyed shooting and collecting guns. He was an active member of the Westgate Sportsman Club, lifetime member of Wisconsin Rifle and Pistol Association and of the Eau Claire National Rifle Club. He was also a member of the Eau Claire American Legion Post 53.
Dick will be dearly missed by Irene, his loving wife of nearly 54 years; brother Roger and Joan Grimm of Minneapolis; sister-in-law Bernice Kawell of Eau Claire; brother-in-law Kenny Ekern of Cameron; several nieces and nephews.
Dick was preceded in death by his parents, Raymond and Iva; and Irene's siblings, William Lange, Evelyn Brummond, Goldene Schiefelbein, Maxine Reetz, Margaret Giguere, Esther Newton, Betty Lighthizer, and Geraldine Ekern.
A visitation will be held Monday, July 26, 2021, from 10 to 11 a.m. at Concordia Lutheran Church in Eau Claire, where a funeral service will be held at 11 a.m. at the church on Monday with Rev. Aaron J. Hamilton officiating. Burial with military honors will be held in Rest Haven Cemetery in Eau Claire.
The family is assisted by Anderson Funeral Home in Augusta.
online condolences can be left at www.andersonfhaugusta.com .

Published by Leader Telegram on Jul. 22, 2021.
To plant trees in memory, please visit the Sympathy Store.
MEMORIAL EVENTS
To offer your sympathy during this difficult time, you can now have memorial trees planted in a National Forest in memory of your loved one.
Funeral services provided by:
Anderson Funeral Home
MAKE A DONATION
MEMORIES & CONDOLENCES
Sponsored by Anderson Funeral Home.
0 Entries
Be the first to post a memory or condolences.