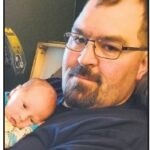 He was a 1993 graduate of East Brady High School and Lenape Vo-Tech and graduated with a Bachelor's degree in Computer Science from Indiana University of Pennsylvania.

Brian was a licensed tugboat operator and was employed for more than 20 years for Snyder Glacial Sand and Gravel in Slippery Rock, where he was a scale master.

Brian enjoyed playing poker, was a Ford Mustang enthusiast, and a football fan. He loved vacationing in Gatlinburg, Tenn., and looked forward to family cookouts, weekend campfires, and fireworks.

In addition to his parents, Brian is survived by his wife, Tabitha R. Dorr Ford, whom he married in Fairview on Oct. 2, 2010. Also surviving is a son, Ronald P. "Ronnie" Ford, at home; his sister, Michelle Seybert and her husband, Russell, of Chicora; his nieces: Kaylynn, Brianna and Emma; his father-in-law and mother-in-law, Paul and Paula Ann Dorr, of Petrolia; his sister-in-law, Reva Kennedy and her husband, William, of Florida, and his niece, Leilani; his aunt and uncle, Dennis and Deborah Meals, of Rimersburg, as well as a number of other aunts, uncles, cousins and many friends.

Brian was preceded in death by his paternal and maternal grandparents, Charles and Genevieve Ford and Leslie and Rose Young.

Friends will be received from noon to 2 p.m. and 6-9 p.m. Monday at the Hile Funeral Home of Chicora, 339 Chicora Fenelton Rd., Chicora.

A funeral service will be held at 11:30 a.m. Tuesday from the funeral home with Pastor David L. West, officiating, assisted by Brian's uncle, Dennis Meals.

Interment will follow at Oak Grove Cemetery, Sugarcreek Township, Armstrong Co. Argyle Masonic Lodge No. 520 F&AM will conduct a memorial service for their departed brother at 5:45 p.m. Monday at the funeral home.

Memorial contributions in Brian's memory may be made to a veteran's charity of one's choice.

Condolences may be sent by visiting: hilefh.com.