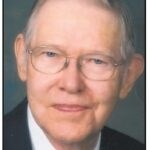 The Rev. Dr. Donald Paul Flick died on July 24th at his home in Bethlehem, NC, having lived fully for ninety one years. He was born in Rimersburg, PA, graduated from Grove City College, and worked briefly for Allied Chemical and Dye Corporation in New York City. His involvement with the national youth work of his denomination led him to enroll in Lancaster Theological Seminary in Lancaster, PA in 1952, where he subsequently earned both a masters and a doctoral degree. Other degrees included a certificate from the Wake Forest School of Pastoral Care in Chaplaincy and a long term health care license from the North Carolina Department of Health. During his last year at seminary Don met and married fellow student and the love of his life for sixty-five years, Jo Anne Townsend of Hickory, NC, and she became his partner in ministry.

Don always loved challenges, so after ordination he accepted a challenge from the Board of National Missions to establish a new congregation in Hagerstown, MD. After eight years he was called to Hickory, NC to establish a second new church, which was originally Church of the Master, and is now Peace United Church of Christ. In 1969 he responded once again to the challenge of the mission board to relocate a congregation from the inner city of Knoxville, TN to the suburbs, and a now thriving Church of the Savior continues to serve the city of Knoxville.

While in Tennessee Don worked part time as Director of Development for Uplands Retirement Center in Pleasant Hill, TN, where he gained a greater interest in caring for and providing quality life for seniors. In 1975 he accepted a call to become Associate

Executive Director for Homewood Corporation in Williamsport, MD. Continuing his work in this ministry, in 1980 he responded to a call to United Church Retirement Home in Newton, NC, where he began the expansion of the ministry beyond the Newton campus. In time he moved to the position of Administrator of the Newton campus, and in 1984 was elected to the position of Executive Director of the corporation. Under his leadership United Church Homes became a multi-faceted ministry with two well established full service continuing care retirement communities and a third one architecturally designed, as well as several HUD housing units.

Don thrived on helping to meet the needs of the communities in which he lived. In Hagerstown, MD and Hickory, NC he helped organize hospital chaplaincy programs. In Waynesboro, PA he helped start a community service program. During his ministries in Catawba County he helped organize Cooperative Christian Ministry, Habitat for Humanity, Adult Life Programs, LINC Ministry, and Catawba Valley Interfaith Council.

A memorial service to honor the memory of Mr. Flick will be held on August 14th at Spirit Place, Abernethy Laurels, Newton, NC, at 11:00 AM. The family will receive friends and share memories immediately following the service.

Online condolences may be left at www.hickoryfh.com

Arrangements are with Hickory Funeral Home.

Published by Leader Times on Jul. 29, 2021.
To plant trees in memory, please visit the Sympathy Store.
MEMORIAL EVENTS
Aug
14
Visitation
Spirit Place
Abernethy Laurels, Newton, NC
Aug
14
Memorial service
11:00a.m.
Spirit Place
Abernethy Laurels, Newton, NC
Funeral services provided by:
Hickory Funeral Home
MAKE A DONATION
MEMORIES & CONDOLENCES
Sponsored by Hickory Funeral Home.
5 Entries
Jo Anne and family, please know that Don was one of the most wonderful human beings I´ve had the joy of knowing. He was so good to my family, my grandmother, Mary A Moore, my aunt Doris Ann Isenhour and so many others I´ve known. He(and you) felt like part of our family....and we were blessed by that. Please know that you are all in my thoughts and prayers as travel this journey.
Anne Mitchell Gibbs
Friend
July 28, 2021
Jo Anne, I just heard about Don. Prayers for you and the family. So many fond memories with you and Don and your children. You and Don have always had a special place in my heart for the guidance and fellowship I have had with you both. May God bless you and be with you and your family. Carsonna
Carsonna Bolden
July 28, 2021
In the 1960s, as a 16 year old, I started attending Church of the Master. This was a turbulent time in our country and I was searching for some clarity. How fortunate I was to find a spiritual leader, teacher, friend and inspiration in Don Flick. His beautiful and instructional words, his guidance, and love will always be treasured. He was a true example of devotion to family, scholarship, community, friends and dedication to positive change in this world. The world was a better place when he walked among us. He will be truly missed by all who knew and loved him.
Jill Crawford
Other
July 28, 2021
Prayers for Don´s family. A true Christian man !
Roland Scott
Friend
July 28, 2021
Jo Anne and family, Don was one of the kindest, most dedicated servants I have ever met. His beautiful spirit touched so many lives. Please know that those who were fortunate enough to be in his presence will cherish his memory. Sending love to all of you.
Sharon Fox White
July 28, 2021
Showing 1 - 5 of 5 results