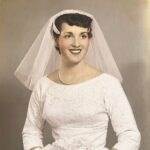 Melba Jean Calhoun Laughner Williams, 81, of Kittanning PA, and most recently Reno, Nevada, passed away on Monday, October 11th peacefully at home with her fur babies and children in attendance. Born on February 3rd, 1940 she was the daughter of Lucia Melba Shrecengost and Samuel Lewis Calhoun. She went by Jean at school, but loved being called Melba in her later years. Jean was a cheerleader and homecoming princess at Dayton High School in Dayton, PA. She married Lieut Robert Orman "Bob" Laughner, Kittanning, PA, December 30, 1959. She traveled with him to his USAF posting at Luke Air Force Base, Phoenix AZ, and then abroad to Wheelus Air Base in Tripoli, Libya. After Bob's untimely death in April 1962, she returned to the USAF base in Phoenix, then lived in Reno NV in 1963, where she had her son Robert Williams, then in Sacramento CA 1964, where she had her daughter Tania Williams. She returned to Armstrong County in 1965 and stayed in close touch with her Dayton High School "Besties" Doris Clever Brown, Bernice Marshall Elkin, Janet West Zorko, and Joanne West Stark throughout her life. They report that Jean had a great laugh and mischievous smile during her high schools days.

Jean obtained a Bachelors in Education from Indiana University of Pennsylvania in 1970 while working full time. She obtained her first teaching position in Meadville PA in 1970. While working as a dedicated Business Education teacher at Meadville Area Senior High School, she obtained Masters in Education from Allegheny College in 1978. She impacted many lives positively as well as developing relationships and travelling abroad with fellow teachers/friends such as Nancy Boland, Jeanine Maziarz, Martha Lumley and Helen Carr. After retiring in 1999, Jean travelled extensively abroad with her son to France, Germany, Italy, Spain, the Caribbean, and Mexico as well as exploring the states of Florida, Maryland, Virginia, Nevada and California with her children – Robert (58) and Tania (57).

Jean will be laid to rest at Salem United Church of Christ Cemetery at a service in Spring 2022.

A memorial site is available for family and friends to share memories and photos at https://www.mykeeper.com/profile/MelbaJeanWilliams/

As Jean was an animal hugger, in lieu of flowers, donations can be made if desired to Best Friends Animal Sanctuary http://support.bestfriends.org/goto/melbajeanwilliams

Published by Leader Times on Oct. 15, 2021.
To plant trees in memory, please visit the Sympathy Store.
MEMORIAL EVENTS
To offer your sympathy during this difficult time, you can now have memorial trees planted in a National Forest in memory of your loved one.
MAKE A DONATION
MEMORIES & CONDOLENCES
0 Entries
Be the first to post a memory or condolences.