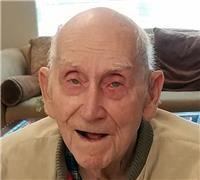 BORN
1929
DIED
2020
FUNERAL HOME
Kull Funeral Home
323 North Olive Street
Saint Elmo, IL
Dale Franklin Paslay, 91 of Cottage Hills, formerly of Fayette County, loving husband, father, grandfather and great-grandfather, passed away on Sunday, Nov. 22, 2020, at Morningside Assisted Living of Godfrey, where he resided for the past few years after a lingering illness.
Service were to be held at noon on Wednesday at Kull Funeral Chapel in Altamont. Christian burial rites will be conducted in Maplewood Cemetery in St. Elmo, at the family lot next to his wife, Mary Lee Ledbetter-Paslay.
Visitation for family and friends was to be held from 11 a.m.-noon at Kull Funeral Chapel. Online condolences can be expressed at www.kullfuneralhome.com. Kull Funeral Home is attempting to follow the Illinois governor's public gatherings request of social distancing of people and masks. Memorials: Liberty Christian Church and or donor's choice.
Dale was born on March 19, 1929, in Sefton Township, Fayette County, near Brownstown, into the family of Harold Mark and Edna Flossie (Sawyer) Paslay, one of six siblings, with four brothers and 1 sister. He married Mary Lee Ledbetter on Dec. 31, 1948, just before midnight on New Year's Eve at the Baptist Church Parsonage in St. Elmo, by the Rev. Earl Atwood, who performed his first marriage. Mary Lee preceded him in death on June 7, 2006.
In 1981, Dale and his family moved to Cottage Hills, where he continued his employment as an operating engineer, belonging to the Local #520 for more than 40 years. Dale had continued his membership at Liberty First Christian Church, where he was baptized and spent his life growing up in the Brownstown area.
He is survived by his sons, Ralph (wife, Marsha Kay-Hinton) Paslay of Dow, and Rodney "RJ" (wife, Janet Bik) Paslay; and daughters, Anita (husband, Mike) Howard of Godfrey, and Alice (husband, Wayne) Shelton of Bethalto.
He was preceded in death by his parents; wife; brothers, Harold Mark Paslay, Donald Leon (wife, Patricia) Paslay, Perry Eugene Paslay and James Edward Paslay, in infancy; sister, Marilyn Louise (husband, Edward) Adams; and granddaughters, Sarah Kophazy and Laura Paslay.

Published by The Leader-Union from Nov. 24 to Dec. 2, 2020.
To plant trees in memory, please visit the Sympathy Store.
MEMORIAL EVENTS
Nov
25
Service
12:00p.m.
Kull Funeral Chapel
Altamont, IL
Funeral services provided by:
Kull Funeral Home
MAKE A DONATION
MEMORIES & CONDOLENCES
2 Entries
I always loved to Dale coming into the Hall to pay his dues. He was always such a pleasure to have a conversation with and he was always smiling. I've thought about him often over the last couple years that I haven't seen him and will continue to do so over the upcoming years. Amy
Amy Wilson
November 24, 2020
So sorry for your loss, brought back so many memories of our growing up with your family, our thoughts and prayers are with you guys
Ken(Moe) Myers
Friend
November 24, 2020
Showing 1 - 2 of 2 results