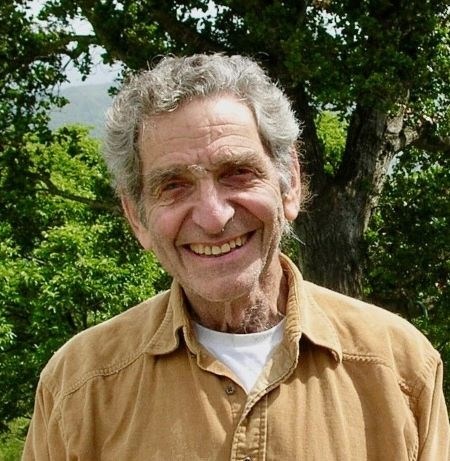 Arthur Herold Lachenbruch (Art) grew up in New Rochelle, New York and Bethesda, Maryland, the youngest of four rambunctious boys, to Milton Cleveland Lachenbruch and Leah Judith Herold Lachenbruch. He grew up in a loving but eccentric, progressive, and intellectual family. Care and humor helped them through the Great Depression, during which his father had to travel months at a time for his job, and his mother worked full-time as a social worker. His oldest brother, Simon, was a mathematical prodigy. David was relentlessly funny. Mickey (Milton C., Jr.), like Art, was athletic, and the two did endless pranks together, including sawing a hole between their bedrooms so they could talk at night.

His high school guidance counselor suggested Art not go to college, but in his senior year, he found a channel for his curiosity and energy when he heard a United States Geological Survey (U.S.G.S) scientist speak at a school assembly. Before entering the Army Air Force (1943-1946) and during his summers as an undergrad, he worked on geological mapping projects as a camp cook, field hand, and backpacker in the Brooks Range and in Southwest and Southeast Alaska. He went on to have a distinguished and fulfilling career as a geophysicist for the U.S.G.S. Art gave much credit for his successes to the Army Air Force for placing him, at age eighteen, on a project with a set of thoughtful college graduates who mentored him, for making college courses available by correspondence, and for the G.I. Bill. He also credited his motley, engaging, and brilliant colleagues in Alaska and later at the U.S.G.S. Among his many honors, his professional societies awarded him the Kirk Bryan Award and the Bucher Medal. In 1975, Art was elected to the National Academy of Sciences.

In 1950, he was finishing a B.S. in geology at Johns Hopkins when he met Mary Edith Bennett (Edie), a nurse from West Virginia, on a blind date. Fatigued from travel and finals, he fell asleep in the movie, but she gave him a second chance, and they went dancing the next night. They dated for several days before he left for yet another three-and-a-half-month field season in Alaska, and then married a few weeks after he returned. Art's family was Jewish, Edie's was Southern Baptist, but they married in a Unitarian church. It was a Thursday, and after that, every Thursday was their anniversary. Art then began a Ph.D. in geophysics at Harvard while Edie worked as a nurse. When his research took him to Dillingham, Alaska, for several months and then to the far northern village of Utqiagvik (Barrow) for two years, she went along and worked at Native healthcare facilities and as his field hand.

They had their first child, Roger (1954), back in Massachusetts, then moved to Palo Alto, California, for Art's job with the U.S.G.S. Charles (1955-2019) and Barbara (1956) were born soon after. In 1963, the family moved to nearby Los Altos Hills for a more rural life. Art and Edie loved gardening and inviting neighbors, friends, and family to come and stay. Two generations of children grew up playing in the chaparral, taking runs, and jumping in the pool. As a planning commissioner for Los Altos Hills for more than a decade, Art led a group that developed one of the earliest ordinances to tie minimum lot size to a property's slope. Eventually, Art and Edie bought eighty acres in the redwoods, where they and their dog spent weekends for thirty years. They moved to Corvallis in 2011 to be near Rog and Barb. Edie passed away in 2016.

At the U.S.G.S, Art led a team of scientific, technical, and clerical people he respected greatly. Although he was a research scientist, he was never afraid to advocate for what science showed to be the safest course for the environment and local communities. Early on, his team used the tools of heat flow (and a lot of math) to advance engineering practices in permafrost zones, which ultimately helped avert the environmental disaster of a buried hot-oil pipeline across Alaska. Later, they analyzed how much heat escaped from the earth's crust, estimated how much of that was generated by friction or magma chambers, and made conclusions that contributed to plate tectonics, seismology, geomorphology, and the discovery of geothermal resources. One project found that the temperatures deep in boreholes were out of sync with recent surface temperatures. This 1986 work was the first to show that the solid earth was heating up, and contributed early evidence for climate change.

But none of these biographical bits touch on Art's remarkable nature. He thought things through, forward and backward, and put together ideas no one else had considered. He listened, was thoughtful, pitched in, demonstrated sincere appreciation for what he had, and was loving to his family and pets. His influence on colleagues, friends, caregivers, and family was enormous. Art is survived by his children, Roger and Barbara Lachenbruch, and his grandchildren, Nathan and Elena Gartner.

The family wishes to thank his caregivers, particularly those at Morning Glory Care home and the staff of Lumina Hospice. Remembrances can be posted at obituaries.neptunesociety.com. Memorial contributions can be made to the Greenbelt Land Trust, Hidden Villa, or Grassroots Ecology.

Published by Lebanon Express from Sep. 23 to Oct. 5, 2021.
To plant trees in memory, please visit the Sympathy Store.
MEMORIAL EVENTS
To offer your sympathy during this difficult time, you can now have memorial trees planted in a National Forest in memory of your loved one.
MAKE A DONATION
MEMORIES & CONDOLENCES
1 Entry
So sorry to learn of your father´s passing. I know he was a wonderful person because you are.
Amy Rossman
Friend
September 23, 2021
Showing 1 - 1 of 1 results