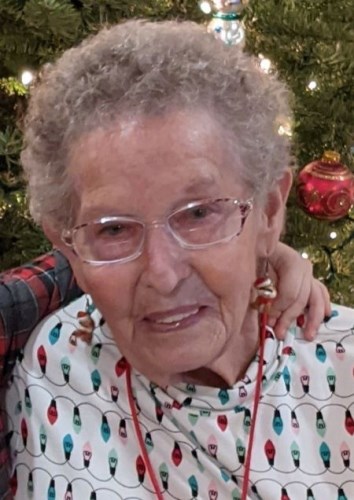 On Tuesday, September 7, 2021, Gwendolyn Faye Johnson, known as "Faye" received her wish of "the Lord to take her Home". Faye was born in Hobart, Oklahoma to Henry Easton and Alta Sells on May 20, 1935. Like many families at the time, they migrated to Oregon and found their new home on Ferguson Road near Junction City. Her older brothers, Bill and JC, and her little sister, Barbara Ann and Faye were quickly immersed in the community. She graduated from Junction City HS in 1954.

Faye met James W. Johnson in Eugene and was married on February 5, 1956. Soon they started their family of boys; Doug, Harlan, and Neil. Raising a family in Junction City was a full time job and she was involved in sporting events and church attendance. In the 1970's, Faye branched out and took a job at Hickory Farms, later at Ralph's Drugs store in JC and finally was known as the "Sample Lady" at various supermarkets in the area.

In 2000, Jim and Faye sold their farm and moved to Albany to be near family. She filled her days with garage sales, antique stores and thrift shops. Faye loved a "good deal". In the winters, they traveled to Yuma, Arizona.

Faye's failing health and Jim's Parkinsons initiated a move to Assisted Living in 2017. Soon after her "wings were clipped" as her driving days ceased and her immobility increased. Even in her last days, Faye was anxious to get out to a Thrift Store.

Faye is predeceased by her parents, all her siblings, her son, Harlan, and Jim in 2019. Survivors include; her sons, Doug and Neil, their wives Lorna and Gitte; two grandchildren and two great-grandsons.

I lovedFaye and Jim! They became family at the restaurant I worked at! I visited them at their home a time or two! Faye would bring her thrift store finds and show me or sell me items! She always reminded me of my mother in some way! I visited Jim once settled at the retirement home! My condolences to the family!
Pam Ballard
September 24, 2021
Showing 1 - 1 of 1 results