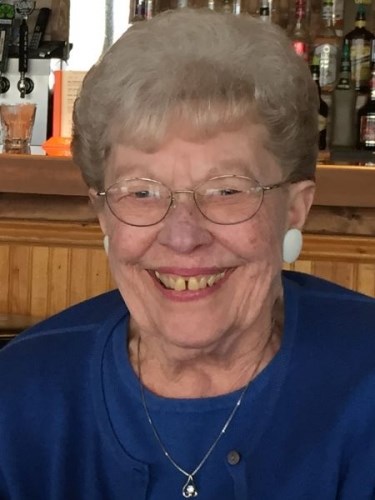 At Blanchard High, Vera played varsity basketball, sang with the Glee Club, was a member of the Honor Society and Jack's girlfriend. As a junior, she was Blanchard High's "all around girl."

Vera married Jack Richey on July 3, 1948, in their hometown of Blanchard then promptly moved west settling in Corvallis and Albany. Together they raised four children, Jacque, Larry, Tony, and Ron, and celebrated 70 years of marriage. Vera worked side by side with her husband Jack attending to the "books" for Richey's Markets. She and Jack enthusiastically supported the Corvallis Boys and Girls Club and American Legion Baseball while rooting for the Beavers.

Vera was happiest when surrounded by family, gardening, partying with dear friends, traveling with Jack, and working loose slots at the casino.

Vera passed away peacefully at the Samaritan Evergreen Hospice House. She spent her final hours with her children and grandchildren by her side. They are thankful for the loving care Vera, and they received at the House. The family is also grateful for the devoted care Vera received as a 10-month resident of Quail Run at the Mennonite Village. Following Vera's wishes, her family will not host a memorial service. So, to Mom-Grandma-Great Grandma-Sis, now united with Jack, "all joy."

Arrangements are by McHenry Funeral Home.

Published by Lebanon Express on Sep. 25, 2021.
To plant trees in memory, please visit the Sympathy Store.
MEMORIAL EVENTS
To offer your sympathy during this difficult time, you can now have memorial trees planted in a National Forest in memory of your loved one.
Funeral services provided by:
McHenry Funeral Home & Cremation Services - Corvallis
MAKE A DONATION
MEMORIES & CONDOLENCES
Sponsored by McHenry Funeral Home & Cremation Services - Corvallis.
1 Entry
Vera was an amazing, fun, kind woman. Our family has many great memories to remember! We thought the world of both Vera and Jack. Our love and deepest sympathy to all of the family. Hugs, Robyn
The Guerber/Rice Family
September 25, 2021
Showing 1 - 1 of 1 results