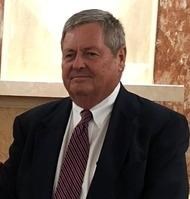 BORN
1947
DIED
2021
FUNERAL HOME
Striffler-Hamby Mortuary
4071 Macon Road
Columbus, GA
David Charles Jasper
December 2, 1947 - October 15, 2021
Hamilton, Georgia - David Charles Jasper of Hamilton, Georgia passed away quietly on the morning of Friday, October 15, 2021. He was seventy-three years old.
David was born to Julius Stanley and Adelynn Norkus Jasper on December 2, 1947 and was raised in Columbus, Ga. He was a graduate of Jordan High School and Columbus College. He graduated Gamma Beta Phi earning a bachelor's degree in accounting. David served honorably in the United States Marine Corps and was a veteran of the Vietnam War. He owned his own painting and decorating company for almost fifty years that served Columbus and the surrounding areas. He was an active parishioner at Christ the King Catholic Church in Hamilton, Ga.
He is preceded in death by his parents, Julius and Adelynn, his brother, Paul, and sisters, Shirley Anne and Patricia Jasper. David is survived by his loving wife, Marie and his three children, Michael Hensley Jasper, Kristin Brantley and her husband, Jason, and Ashley Jasper. He is also survived by his many grandchildren, Amber and Michael of Columbus, Ga., Josh of Birmingham, Al., Jake, Adelynn and Peyton of Huntsville, Al., Isabella of Hamilton, Ga and David of Waverly Hall, Ga.
David was known for always placing the needs and wants of others before his own. His life can easily be summed up as a life of service toward others. He always saw the best in everyone and lived a life modeled after St. Joseph. Those who knew David well would tell you how much he loved his family and how he sacrificed daily for their needs and wellbeing. He was a wonderful husband and the best father anyone could have been blessed to have as their own. He was a hero to those closest to him and would do anything for anyone who needed it. He will be dearly missed by those who knew and loved him.
David is also survived by his sister, Paula Campbell and brother, James Quinlan along with many nieces, nephews and friends. Thank you for all of your love throughout the years and for sharing in David's most cherished moments.
A Rosary will be held on Friday October 22nd, 2021 at 6:00pm followed by visitation at Striffler-Hamby. A funeral mass will be held at the family's home parish of St. Anne Catholic Church at 11:30am on Saturday, October 23rd, 2021. The internment will follow directly after mass at Parkhill Cemetery. In lieu of flowers please make donations to St. Anne Outreach, who service the needs of the poorest in the community.