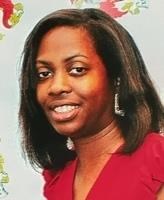 BORN
1981
DIED
2021
FUNERAL HOME
Charles E Huff's International Funeral Home
927 5Th Ave
Columbus, GA
Keyah Aisha Baker
September 24, 1981 - November 18, 2021
Columbus, Georgia - Keyah Aisha Baker, 40, of Columbus passed on Thursday, November 18, 2021 at St. Francis Hospital. A Graveside Service will be conducted at 1:00 PM on Saturday, November 27, 2021 at Green Acres Cemetery. Rev. Emmett S. Aniton will be officiating according to the Charles E. Huff's International Funeral Home, Inc. Viewing will be held on Friday, November 26, 2021 from 2:00 PM - 4:00 PM at the funeral home located at 927-5th Avenue, Columbus.
Keyah Aisha Baker was born on September 24, 1981 in Columbus, Georgia, the second of three Baker children. Keyah attended St. Mary's Road Montessori, Grace Christian Academy, Reese Road Elementary and Richards Middle School, where she excelled academically and participated in cheerleading. She graduated from Columbus High School in 1999, and attended the prestigious Fisk University, a historically black university located in Nashville, Tennessee. While there, Keyah earned a Bachelor of Arts in political science in 2003. While at Fisk, Keyah was awarded Ms. Political Science in 2001, served as a U.S. Congressional intern in 2001, and participated on the Fisk University tennis team.
A lifelong lover of learning, Keyah continued her educational pursuits after graduating from Fisk. She earned a general practice paralegal certificate from Southwestern Career College in 2005. She earned a Master's in Business Administration in 2013, and was completing a Doctorate in Business Administration at Walden University in Baltimore, Maryland.
Keyah was a strong, powerful, beautiful, incredible woman who positively impacted all that she touched. She was generous in donating her time and resources to causes that she held dear, including the Paralyzed Veterans of America, Boys' Home, United Negro College Fund, and Sierra Club. She maintained membership at Friendship Baptist Church, where she remained active in both the Missionary program and Sunday School.
Keyah is survived by her son, Jayden; her parents, Dr. Lionel and Rowena; her brothers, Dr. Tabari (Dr. DaJoie), and Dr. Gamal (Constance); her niece, MacKenzie, and nephews, Croslan, and Ellis, and numerous aunts, uncles, and cousins. In lieu of flowers please send donations to the American Heart Association at the following link: https://www.heart.org/?form=legacy&s_src=20U2W1EEMM&sub_src=footer_memorial_gift or mail it to: PO Box 840692, Dallas, TX 75284-0692.

Published by Columbus Ledger-Enquirer on Nov. 26, 2021.
To plant trees in memory, please visit the Sympathy Store.
MEMORIAL EVENTS
Nov
26
Viewing
2:00p.m. - 4:00p.m.
Charles E Huff's International Funeral Home
927 5Th Ave, Columbus, GA
Nov
27
Graveside service
1:00p.m.
Green Acres Cemetery
GA
Funeral services provided by:
Charles E Huff's International Funeral Home
MAKE A DONATION
Please consider a donation as requested by the family.
MEMORIES & CONDOLENCES
Sponsored by Columbus Ledger-Enquirer.
7 Entries
Condolences and prayers to all family, friends and loved ones of Keyah B. I am so sorry and at a loss to hear of your passing. I will never forget meeting you at Fisk and randomly seeing you all over the country. Rest in His ever loving arm.
Phoebe Gisele Griffin, MD
Friend
December 8, 2021
Keyah it has been so hard to understand why you´re gone. I´m devastated, I miss your voice. I want you to call me, knowing that you won´t call anymore is so hard. I love you and now you can rest. You were one of my closest friends at Fisk, always trying to drag you to parties. I´ll forever miss you!
Jacie Fontenot
School
December 2, 2021
Lionel -- I'm so sorry to hear of your loss. May the love of friends and family carry you through your grief.
Joyce Pearson
Other
November 29, 2021
May your memories of the wonderful times you shared with your loved one comfort you and your family, today and always.
American Heart Association
November 29, 2021
Our heartfelt prayers thoughts and condolences are with the Baker Family and may the LORD continue to BLESS and STRENGTHEN each of You is our prayer.KEEP THE FAITH and BE BLESSED ALWAYS. The Alexander/ Mason/Gregory Family
Erskine Alexander,Sr
Other
November 27, 2021
Dr. Lionel and Rowena, Dr. Tabari, Dr. Gamal, and family, Heartfelt sympathies on the passing of Keyah. Memories of her with my daughters are often recalled and Keyah´s quiet and polite demeanor blended well as they played , watched movies and enjoyed being together. My prayers are with your family and may God cover you with his love always. JoAnn Wilson Barnes Fayetteville, Georgia Arika Joseph Atlanta, Georgia
JoAnn Wilson Barnes
Friend
November 26, 2021
Dr and Mrs Baker and family. Soo sorry for your loss. My sincere condolences and sympathy to you and your family. Praying for some comfort during this trying time. My heart is aching. Rest in peace and in Heaven Keyah. WILLENE TERRY BAILEY RN
Willene Terry Baileys
November 26, 2021
Showing 1 - 7 of 7 results