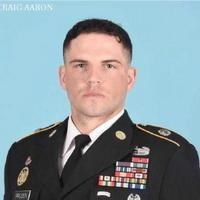 BORN
1988
DIED
2021
FUNERAL HOME
Mountcastle Turch Funeral Home & Crematory Inc
13318 Occoquan Rd
Woodbridge, VA
Staff Sergeant Craig Aaron Pruden
September 16, 1988 - September 15, 2021
Fort Campbell, Kentucky - Staff Sergeant Craig Aaron Pruden, lost his battle to PTSD on September 15th, 2021, at the age of 33 in Fort Campbell, Kentucky. He proudly served his country in the United States Army.
For those who knew Craig, they knew him to be a man of passion. Born on September 16th, 1988, in Woodbridge, Virginia, he led a life full of courage and accomplishment. At the age of 18 he enlisted in the United States Army and went on to boldly serve two deployments in Afghanistan and one in Iraq. Through strength and determination, he earned the Sapper tab, distinguishing himself among the many. While deployed he received the Bronze Star with "V" device for heroism and valor in the face of danger. He was wounded in battle in Afghanistan and was awarded the Purple Heart. Army Awards include: De Fleury Medal, Meritorious Service Medal Army Commendation Medal, 7xs Army Achievement Medal, 4xs Army Good Conduct Medal, 4xs National Defense Service Medal Afghanistan Campaign Medal w/Bronze service Star, 2xs Global War on Terrorism Service Medal Iraq Campaign Medal w/Bronze Service Star Overseas Service Bar, 3xs Military Outstanding Volunteer Service Medal Army Service Ribbon Overseas Service Ribbon, Sapper Tab, NATO Medal Combat Action Badge, United States Army Recruiter Identification Badge, Gold Air Assault Badge Noncommissioned Officers Professional Development Ribbon, 3xs Combat and Special Skill Badge Basic Marksmanship Qual Badge. Craig also earned the Edelweiss.
As highly decorated as he was, he was as selfless and true a man one could ever find. He humbly dedicated himself to the service and support of others and empowered each one of us to pursue our goals relentlessly. He was highly intelligent, incredibly motivated, and loved with a reckless abandon. He left us with these words, "you have what it takes to be a better version of yourself." Craig Pruden was the best of us. He lived a life that was more than heroic - it bordered on legendary.
He is survived by his wife Mariah, and two sons, Trey and Tristin; his father Rickie and his wife Ellen Pruden, his mother Elizabeth and husband Richard Youngblood; grandparents Lois and the late MGYSGT Arnold Pruden United States Marine, Bill and Joanne Barbee; Aunts Jennifer (Moongia) Jenkins and Kim Pruden; siblings Devon Pruden wife Carli, Cady Pruden, Rebekah Youngblood, Specialist Thomas Youngblood, United States Army Ranger and his wife Shayna, and Eoin Youngblood; in addition to a lifelong friend and brother Anthony Gaston. And his special girls Ni'Vita and Vatani
Please join us in remembering his life at a Funeral service in his honor. To be held at Church of the Nazarene, 14001 Smoketown Rd. Woodbridge, VA 22192 on Tuesday, September 28th. Beginning at 11:00 a.m. Following the service Craig will be laid to rest at Quantico National Cemetery, 18424 Joplin Rd, Triangle, VA 22172. The Family is asking all brothers and sisters current or prior service to reach out to https://www.veteranscrisisline.net/ if they're in need of help in honor of Craigs Memory. In lieu of any flowers for the family, please consider donating to k-9forwarriors.org in his honor. He will be missed by so many friends and loved ones. There was so much joy, love, and inspiration that he brought to all our lives. We could not be prouder of the man he became and the legacy he left behind. Til Valhalla "Where Heros Live On Forever."