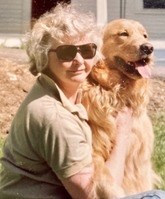 Antrim NH — Cynthia Cheney Gilmore, known as Cinda, was born on December 3, 1935 in Hamden, Connecticut, and grew up in Cheshire, Connecticut. She was the youngest child of Marvin and Elinor Cheney. She went to Colby Sawyer College, and received her Master's in Ed. at Hawthorn College in Antrim, N.H.

She married Lyman Gilmore at the Yale Chapel in 1958. They lived in New York City for a time, where their son Richard was born in 1959, and in Stamford, Connecticut, where their daughter Lisa was born in 1961. Cynthia and Lyman then moved their family to Antrim, New Hampshire.

Their life in Antrim started out on High street with an array of dogs and cats, goats, Arnold the boa constrictor, and briefly, Moxi the horse. It was on High Street where Cynthia taught herself to cook by watching Julia Child and The Galloping Gourmet, making her way through their recipes. She became a fabulous cook, and it was to her table we all flocked each holiday.

Cynthia and Lyman's move to Highland Avenue marked their final home. Cynthia worked as a librarian at New England College for many years, and upon her retirement dedicated herself to her family, reading, doing the daily NYT's crossword, and her beloved dogs, Logan and Beck.

Cynthia died November 12, 2021. She was predeceased by her parents, Marvin and Elinor Cheney, and her husband of 63 years, Lyman Gilmore. She is survived by her brothers, Richard and Marvin and their families, her children, Richard Gilmore, and his wife, Ellen, and her daughter Lisa, and her husband, Kevin, and grandsons, Emerson and Gillan. And Cat, who saw her through her final hours.

A celebration of Cynthia and Lyman's "great adventure" will be held at the Antrim town hall on December 11th at 10am, followed by a reception at Alberto's restaurant, where Cynthia and Lyman and their children dined for nearly 60 years.

In lieu of flowers, donations may be made in honor of Cynthia's love of animals, to the New Hampshire Humane Society.
Published by Monadnock Ledger-Transcript on Nov. 23, 2021.
To plant trees in memory, please visit the Sympathy Store.
MEMORIAL EVENTS
Dec
11
Celebration of Life
10:00a.m.
Antrim town hall
NH
MAKE A DONATION
MEMORIES & CONDOLENCES
1 Entry
Dear Lisa and Kevin, I wish I was home with my stuff and able to send you thought on all I am feeling. I'm in a rehab facility in Haverhill for a carcinoma on my leg thqt was infected and I couldn't walk. Much better now and soon will be home. When Lyman left us I composed many notes in my head that I never wrote and much too soon it was time to write another for Cinda. I hold you close in my heart and wish that you hadn't had to experience such a happening. No matter how long expected, a death is never easy and two is harder. Prayers for you all.
Pat Cloutier
Friend
November 27, 2021
Showing 1 - 1 of 1 results