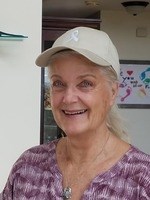 Greenfield NH — Gwynne Marie Mitchell, 73, a resident of Greenfield, NH and Estero, FL, passed away peacefully and surrounded by family on November 14, 2021, at Joanne's House at Hope Hospice in Bonita Springs, FL. Although being diagnosed with cancer almost three years ago, she continued to live her life with love, courage, hope, and dignity.

She was born on April 26, 1948, in Corpus Christi, TX, to the late Willard and Esther (Carlson) Olson. Her dad was a Naval officer, and Gwynne jokingly described herself as a 'Navy brat'. Along with older twin sisters Karen and Kaye and younger brother Byron, she was grateful for experiencing many beautiful places in the country as she was growing up, including Hawaii, Maryland, Florida, and Maine, where Brunswick Naval Air Station would be her dad's final duty station. It was in Brunswick where, as a middle-schooler, she met the eventual love of her life, Gene Mitchell. Thanks to his persistence (and the encouragement of his sister Jayne, a close friend of Gwynne's), the two dated in high school and found each other again when Gwynne graduated from Alma College in Alma, MI. They married on June 28, 1970, and welcomed their daughter Heather the next year. With the addition of son Heath a few years later, the family was complete.

Gwynne lived in New Hampshire most of her life, and loved the natural beauty and privacy afforded by small town living (though she could have done without the winters!) As a young mother, Gwynne worked hard to help support her family. She worked in the billing department at Matthew Thornton Health Plan in Nashua, eventually becoming department head. In 1975, while pregnant with Heath, Gwynne switched gears and bet it all on starting a new business with Gene. They founded T.C. Bolt in Wilton, NH, where Gwynne managed all aspects of the business as COO and Gene spearheaded sales and marketing. Over the years it developed into a true family affair; after school and during the summer, Heather worked in the office and Heath in the shop putting up orders and repairing tools. Gwynne's passion for the business and meticulous attention to detail helped ensure the company's growth and success, leading to the creation of a separate business in 1990 that focused on the sale, rental, and repair of bolting tools. The new company was called G.W.Y., and with Gene at her side, Gwynne once again transformed a fledgling start-up into a flourishing business enterprise. She was well-known and respected in the industrial construction and structural steel industry for her technical expertise and knowledge of electro/mechanical tooling, and for her commitment to providing outstanding customer service. Gwynne was proud of G.W.Y. as a woman-owned business, and delighted in 'educating' those who might doubt the competence of a woman in a traditionally male industry. She deeply valued her relationships with the people she worked with, and considered them close friends. Likewise, she developed strong ties with customers and colleagues throughout her career. Although she retired in 2018, Gwynne's legacy underpins the values and innovation that drive G.W.Y. today.

When not running the business, Gwynne didn't lack for ways to fill her time. She was an avid gardener, reader, cook, crafter, and gambler (nickel slots only!) Whether tending an enormous vegetable garden that would produce a years' supply of canned goods, devouring the latest James Patterson or Steven King thriller, baking mouthwatering cinnamon-raisin bread, or working on crewel embroidery or sewing projects, she kept busy. And her prowess with the nickel slots was no joke—Gwynne was known to make $20 last an entire afternoon! She also never missed a birthday or anniversary, spending hours to select the perfect card. You knew you were special when you received a card that made a noise of questionable taste! In recent years, Gwynne loved spending the winter months in Estero, Florida with Gene, and summers at their home in New Hampshire and traveling together in their RV.

Gwynne was devoted to her family as a loving wife, mother, sister, and Tutu (Hawaiian for 'Grandma'). She is survived by Gene, her husband of 51 years, who remains forever amazed by her strength, intelligence, and beauty inside and out. She is also survived by her daughter Heather (Bettencourt) and husband Jay, as well as her son Heath and wife Christina. Gwynne's children are forever grateful for her unconditional love, support, and quirky sense of humor. She always eagerly awaited her summer 'sister trips' with Kaye Stickney and the late Karen Kunz, excursions which were bound to include an abundance of shopping, fun, and mischief. She also cherished visits with her 'big' little brother Byron Olson.

Since 1998, though, her favorite role was as Tutu, and to Kayleigh and Kyren (Bettencourt), she leaves memories of camping, theme parks, and shopping trips for fabulous Easter outfits. Olivia, Quinn, and Cleo (Mitchell) will remember Tutu as their favorite neighbor, who loved making crafts, playing games, and doing puzzles... and who never minded helping to clean up.

To share a memory or offer her family a condolence please visit www.smith-heald.com for more information.

In lieu of flowers, Gwynne's family invites donations in her memory to Joanne's House at Hope Hospice in Bonita Springs, FL.

Arrangements are in the care of the Smith & Heald Funeral Home, 63 Elm Street, Milford, NH 03055.
Published by Monadnock Ledger-Transcript on Nov. 23, 2021.
To plant trees in memory, please visit the Sympathy Store.
MEMORIAL EVENTS
Dec
5
Celebration of Life
3:00p.m.
Greenfield Meeting House
776 Forest Rd, Greenfield, NH
Funeral services provided by:
Smith & Heald Funeral Home
MAKE A DONATION
MEMORIES & CONDOLENCES
5 Entries
A wonderful woman. A keystone in the family and the business.
Tom Schlafly
December 8, 2021
Our thoughts and prayers go out to you, Gene and your family. May the wonderful memories of Gwynne comfort you all.
Jennifer & Skip Parker
November 27, 2021
My thoughts and prayers with family at this time. Heath,Christina,Olivia Quinn and Chloe.
Gail Chavous
Family
November 24, 2021
Our thought and prayers go out to your family Heath and Cristina. We send our love and support Wendi & Pat
Wendi Herne
November 24, 2021
Our hearts go out to all of you! Always in our prayers!
Dube family
November 23, 2021
Showing 1 - 5 of 5 results