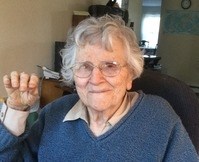 Natick MA — Mary Ellen Crawford Ames of Natick, passed away at her home on Tuesday August 17, 2021 in her 103rd year.

Mrs. Ames was a 1940 graduate of Wellesley College, served in the American Red Cross Overseas Service during WWII and then went on to serve many years working at Wellesley College as Personnel Director, and later as Director of Admissions for the college during a transformative era in college admissions. She was a champion of women's education and affirmative action, served on the CEEB for many years, was an active member of the PEO, an avid reader, and a mentor to many. A celebration of her life is planned for a future date, when it is safer for people to travel and gather.

In lieu of flowers, donations in Mary Ellen's memory may be made to Mary Ellen Crawford Ames Scholarship Fund at Wellesley College, 106 Central Street, Wellesley MA. 02481.