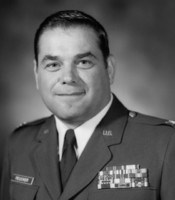 Peterborough, NH — Otto William Peucker passed away at his home in Peterborough, New Hampshire, on September 9, 2021. He was born in Rockford, Illinois on January 10, 1940 the sixth of eight siblings born to Otto and Ruth Peucker. He graduated from East Rockford High School in 1957 and the University of Wisconsin in Mechanical Engineering in 1961.This same year he was in the Rose Bowl in California on New Year's Day. He entered the USAF in 1962 after working as an engineer for Barber-Colman Industries. He married Judith Holmstrom on May 4, 1962.

Otto's career was focused on the maintenance of fighter airplanes. After his tour overseas in Thailand during the Vietnam War, he returned to Ames, Iowa where he received a Masters degree in Aerospace Engineering. He was the Flight Program Officer for the F-15 fighter jet at Wright-Patterson AFB in Dayton, Ohio. He furthered his Air Force career with a tour in South Korea while working at the US Embassy in Seoul. His last assignment was in Bedford, MA at Hanscom AFB where he was Director, Airborne Command, Control and Communications. He retired after 24 years with the rank of Colonel.

Following his retirement, he and his wife relocated to Hillsboro, NH where they lived for over three decades on Franklin Pierce Lake. His four sons and their families grew up watching a small lake cabin become a home for his growing grandchildren. His many talents came naturally. Many grandchildren are snow skiers and water skiers because of his teaching ability. Now there is a great grand-daughter who will hear stories about her "Poppie" and learn to love the snow and lake as much as he did. His four sons all benefited from his work ethic and he took great pride in their successes. Stories are told amongst his family of various exploits their father and grandfather experienced. His love of things mechanical and how things work are traits he passed on to his sons. The family tradition of a Polar Bear Dip into Franklin Pierce Lake to celebrate the New Year began as his idea. Through the years this event has had many themes for family and friends to enjoy.

He will be buried in the NH Veteran's Cemetery, Boscawen, NH. Private services will be held. In lieu of flowers, a memorial donation can be made to Home Healthcare, Hospice and Community Services, 312 Marlboro Street, Keene, NH 03431 or www.hcsservices.org

To share a memory, or to leave the family a message of condolence, please visit Otto's tribute page at www.jellisonfuneralhome.com
Published by Monadnock Ledger-Transcript on Sep. 21, 2021.
To plant trees in memory, please visit the Sympathy Store.
MEMORIAL EVENTS
To offer your sympathy during this difficult time, you can now have memorial trees planted in a National Forest in memory of your loved one.
Funeral services provided by:
Jellison Funeral Home
MAKE A DONATION
MEMORIES & CONDOLENCES
3 Entries
So sorry to hear about Bill´s passing. Many, many memories of times we shared long ago.
Mickey Bowman
Friend
September 26, 2021
Norm & I offer our deepest sympathy He was an amazing man and deeply missed It was an honor to know him
Sandra Henry
Family
September 20, 2021
Offering our deepest condolences at this difficult time.
Jellison Funeral Home The staff at Jellison Funeral Home
September 20, 2021
Showing 1 - 3 of 3 results