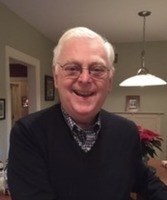 Peterborough, NH — William Gerard "Bill" Ellerkamp Sr. (87) passed away peacefully on the morning of August 25, 2021. A forty-one year resident of Peterborough, NH, Bill and his loving wife Helen, have been residents of Scott-Farrar at Peterborough for the past four years.

Bill attended Manhasset High School where he played basketball and worked at Town Hall Pharmacy in his spare time. He graduated from Hofstra University in 1956. He started his career with Proctor & Gamble and then spent time with 3M and Boise Cascade, where he began a career in retail packaging. Following many years building a career and reputation in retail packaging Bill founded WG Ellerkamp Inc. in 1985 in New Hampshire. He was particularly proud that two of his sons followed in his footsteps in the industry and that WGE Inc continues today as an active Peterborough, NH company run by his son Jack.

Bill was a dedicated and loving husband and father. Bill and Helen, high school sweethearts grew up and were married in Manhasset, NY in 1956. Bill and Helen moved their young family from Long Island to upstate New York in 1966, where they raised their family in Goshen, NY. Bill was a sports lover, and lifelong New York Yankees fan, who encouraged his sons to be active and competitive in whatever they did. He coached Little League and Youth League sports teams for all of his sons and played tennis actively well into his 70's. Bill was also active in community organizations where he lived, particularly with the Lions Club. He was a past president of Lions Clubs in Goshen, New York and Peterborough, New Hampshire.

Bill was born in 1934 in Bronx, NY to Wm E. and Catherine Quinn Ellerkamp. Following the death of his mother at age one, he was lovingly raised by his father and stepmother May Fitzsimmons. He was pre-deceased by his two sisters, Marion (Hobe) and Catherine (Dann) and one daughter, Tracy. He is survived by his wife of sixty-five years, Helen Parker, and four sons and their families; William G Jr "Bill" and Susan Marsh of Groton, MA and their three children, Hannah, Peter and Carl; Andrew P "Drew" and Shelley Raber of Marion, OH and their two children Taylor and Matthew; Derek J of Georgetown, MA and his two children Dylan and Alexandra; and John D "Jack" and Lynn Phillips of Peterborough, NH and their three children, Graeham, Owen and Oliver.

Memorial donations can be made to the Lions Club of Peterborough, c/o Marcia Patten, PO Box 3206, Peterborough, NH 03458.
Published by Monadnock Ledger-Transcript on Sep. 2, 2021.
To plant trees in memory, please visit the Sympathy Store.
MEMORIAL EVENTS
To offer your sympathy during this difficult time, you can now have memorial trees planted in a National Forest in memory of your loved one.
MAKE A DONATION
MEMORIES & CONDOLENCES
2 Entries
May his memory be a blessing
Steve Gitlin
Work
September 11, 2021
My prayers are with Bill's family during their time of sorrow. I worked for Bill and his son Jack, I have got to say they were a couple of the kindest people and nicest people to work for. Truly a good man. He will be missed.
Sara Lybbert
Work
September 7, 2021
Showing 1 - 2 of 2 results