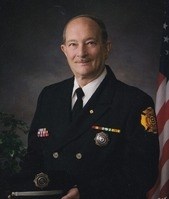 Hancock NH — William Cox Owen, 74, passed away November 24, 2021 at Care One Nursing Center in Lowell, MA, due to injuries resulting from the tragic accident at the Hancock transfer station on May 19, 2021.

William was born in Philadelphia, PA, July 15, 1947, the son of William C. and Lillian (Bullock) Owen. After graduation from St. Joseph High School, Camden, NJ in 1966, he enlisted for four years in the United States Navy. He served on the USS Shangri-la and was a plank owner on the USS John F. Kennedy (CV-67).

William was a third-generation firefighter and helped in the fire department at the age of 14 in Mt. Ephraim, NJ. He had a life-time career as a paid firefighter and fire marshal in Deptford, NJ, receiving several commendations from the Deptford Fire Department. He was also an EMT for a private ambulance service in South Jersey. William retired in June, 2007 and moved to New Hampshire.

He is survived by his wife, Carol Ann, of Hancock, his sister Mary Louise Hirshmiller and husband, Dennis, of Mont Alto, PA, a niece Elise Burgess and husband Justin, grandniece Adelai Burgess, and grandnephew, Owen Burgess of Germantown, MD.

A graveside service will be held in the spring at the Hillside Cemetery, Hancock, NH.

To share a memory, or to leave the family a message of condolence, please visit William's tribute page at www.jellisonfuneralhome.com
Published by Monadnock Ledger-Transcript on Nov. 30, 2021.
To plant trees in memory, please visit the Sympathy Store.
MEMORIAL EVENTS
To offer your sympathy during this difficult time, you can now have memorial trees planted in a National Forest in memory of your loved one.
Funeral services provided by:
Jellison Funeral Home and Cremation Services
MAKE A DONATION
MEMORIES & CONDOLENCES
2 Entries
Dear Carol; I am so sorry for your loss. My sympathy and love to all your family. Love, Bobbie
Bobbie Coffin
November 30, 2021
Offering our deepest condolences at this difficult time.
Jellison Funeral Home The staff at Jellison Funeral Home
November 29, 2021
Showing 1 - 2 of 2 results