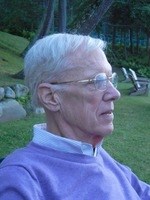 Born in Ann Arbor, Michigan, he grew up in Chicago and LaGrange, Illinois. He attended the University of Iowa, graduating in 1966 with a B.S. in General Science.

He began work as a research assistant in the Pharmacology and Toxicology laboratory at the University of Iowa in 1967. Drafted into the military in 1968, he served until 1971 at the Nike Hercules Air Defense System in San Francisco, California. He returned to the university's Pharmacology and Toxicology laboratory in 1971 as a research associate and stayed until 1974.

A self taught carver, he began when he was 7 years old, and from childhood on he honed his skills through trial and error. His studio first opened in Iowa City, Iowa in 1974 and ran in that location until 1987. It then moved to Carmel Valley, California and remained there until 2004. A trip to New England in the fall of 2003 led him to its present location on the grounds of Frye's Measure Mill and its owners Pam and Harley Savage to whom William and Robin will always be grateful. Each studio location afforded him the opportunity to produce a prolific body of work that he hoped would "stand the test of time."

In addition to his studio work he was proud to be a participant in the following endeavors:

- The opportunity to create his last major commission piece "Cesar's Watch" for Amy and Cesar at LaBelle Winery in Amherst, New Hampshire in 2015.

- Being on the faculty of Yestermorrow Design / Build School in Warren, Vermont and Sharon Arts Center School in Sharon, New Hampshire for six years

- He held juried memberships in the Carmel Art Association, the Society of Animal Artists and the League of New Hampshire Craftsmen.

He leaves behind many loving and supportive people in his life.

Longtime companion Robin who is grateful for her twenty three years with this extraordinary person. His gentle soul will walk with her everyday.

Joan Schnute and Ronda Reinke who gave loving support through formative years. Many nieces and nephews. Many wonderful friends.

William's love of nature and all things living will indeed stand the test of time in the carvings of Flora and Fauna he so masterfully created.
Published by Monadnock Ledger-Transcript on Oct. 28, 2021.
To plant trees in memory, please visit the Sympathy Store.
MEMORIAL EVENTS
To offer your sympathy during this difficult time, you can now have memorial trees planted in a National Forest in memory of your loved one.
MAKE A DONATION
MEMORIES & CONDOLENCES
0 Entries
Be the first to post a memory or condolences.